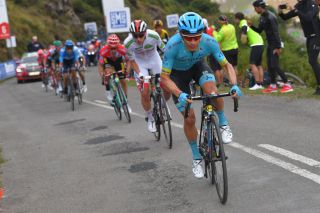 After two disappointing days in the mountains, Miguel Angel Lopez (Astana) finally ended the Vuelta a Espana’s second week on a much-improved note as he launched a blistering attack on La Cubilla’s summit finish.

Fourth overall and on the hunt for a podium place in Madrid, Lopez powered away in a two-part acceleration after Astana had laid down a ferocious change of pace more than halfway up the interminable slopes of La Cubilla.

However, neither of his Lopez's ferocious charges managed to rattle the man who he was really targeting, third-placed Tadej Pogacar (UAE Team Emirates).

Still, for Lopez, after losing time on los Machucos and again at El Acebo, La Cubilla saw him back in the game, even if not – yet – landing telling blows.

"I tried it but it didn't work out, and I will have to try again to get on the podium en route to Madrid," Lopez said afterwards. "I felt better than yesterday, there are still some good stages left, it's encouraging."

On a good day all round for Astana, Lopez's teammate Jakob Fuglsang also took the stage win.

Asked about what he thought Lopez could achieve from hereon, the Dane pointed out that he had yet to see how the battle between the GC favourites had played out.

"But as far as I could understand, the Movistar captains [leaders] are maybe paying a price for doing the Tour and Vuelta one after the other," Fugslang said.

"We're still going to try and get the maximum for Miguel Angel in the third week. It's going to be interesting."