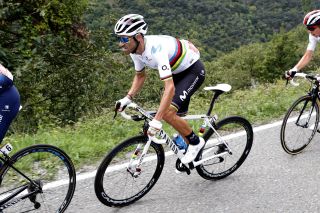 Alejandro Valverde (Movistar) continues to hold on to second place overall in the Vuelta a España at 39 despite suffering on the interminable ascent to La Cubilla during stage 16 on Monday.

A sudden increase in pace by Astana with eight kilometres to go did not put the Spaniard in difficulties, nor did a first vicious acceleration by Miguel Angel Lopez, apparently recovering from his tough day on the Acebo.

However, a second attack by Lopez with Tadej Pogacar (UAE Team Emirates) on his wheel left Valverde reeling and looking for assistance from teammate Marc Soler as race leader Primoz Roglic (Jumbo-Visma) also dropped the Spaniard two kilometres from the line.

Well supported by Soler, Valverde finally lost 21 seconds and although the 39-year-old said he would have preferred not to lose that time, he was not overly troubled by it, either.

Valverde pointed out that on the Acebo the boot had been on the other foot, as he and Roglic managed to drop Pogacar and Lopez.

"I gain 30 or 40 seconds one day, I lose them the next, it's all very equal," he observed. "Soler was in good shape and did a brillaint job guiding me in."

There had been hopes that Movistar might play a more aggressive game on the third and final stage in the mountains of northern Spain and with a rest day on Tuesday providing further motivation for riders to go all out. But with Valverde not feeling great, Movistar opted to race conservatively throughout.

Meanwhile, Valverde's teammate Nairo Quintana appears to be definitively off the pace, dropping to sixth overall after losing more than two-and-a-half minutes to the Roglic group. Rafal Majka (Bora-Hansgrohe) has now edged ahead of the Colombian, moving into fifth place overall.

But Valverde, despite dropping to 2:46 in the general classification, remains Roglic's best-placed rival, and should the Slovenian star show signs of weakness, the reigning world champion could still challenge in the five stages yet to come.