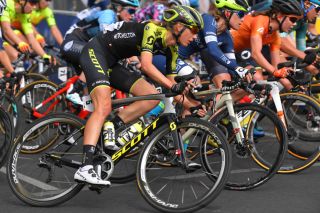 Kennedy has retained Gracie Elvin and Jessica Roberts for the Australian stage race – 20-year-old British rider Roberts also crashed, but has recovered sufficiently to start in Shepparton, Victoria, on Wednesday – and Sarah Roy has been drafted in for her first race of the season to make the squad up to four riders, which is the minimum requirement to take part, while most of the other teams taking part have six riders.

Roberts and Williams required stitches after Saturday's crash, while both Allen and Brown were taken to hospital for scans. Meanwhile, Amanda Spratt – who finished second to Kennedy at last year's Sun Tour – has opted to skip this year's race in order to head back to Europe to prepare for the spring races on her programme, which include the Ardennes Classics.

Kennedy re-signs with Mitchelton-Scott for 2020

"It's been a hectic few days checking out, and following up on, our injured riders, and finally, together with the team doctor, we've decided to be cautious about their health, so we have three withdrawals after the Cadel Road Race," said team sports director Alejandro Gonzalez-Tablas on the team's website.

"We needed four riders to be able to start the Sun Tour, and we're aiming to win the general classification with Lucy, so we need as many numbers as possible, because you never know what can happen in the race," he said.

Hosking and Rally out of race

The in-form Australian sprinter Chloe Hosking is also a non-starter at this year's race after her Rally Cycling team was decimated in the Cadel Evans crash, with Hosking the only rider from the US squad not to fall. The team has subsequently been forced to pull out of the Sun Tour, where Hosking would have been one of the big favourites – if not a shoo-in – for victory on the two-day event's opening stage, which is a flat, 94km loop around Shepparton.

As for defending champion Kennedy, she has her eye on Thursday's 75.2km second and final stage as the place to try to take the title once more.

"That second stage is really interesting," said the 31-year-old Australian. "We start with a 30km descent, do a loop, and then come back up the climb. It's a pretty unusual stage. I’ve ridden it, and it's not a super-hard climb, but it’s obviously really long, and there are going to be huge time gaps.

"We're starting with the sprint stage, so for me it's about staying safe and conserving energy," continued Kennedy, "but we've also got a couple of fast girls in our team with Gracie Elvin, who has been sprinting well, and Jess Roberts.

"It's a pretty cool feeling," she said of going into the race as arguably the rider to beat. "It will be the first UCI race that I'm returning to as the defending champion, so that's going to be a new experience."

The Women's Herald Sun Tour runs from February 5-6, while the men's race starts also starts on February 5, and finishes in Melbourne on February 9.