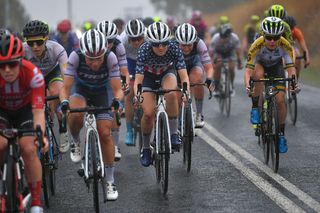 The women's edition of the 2020 Cadel Evans Great Ocean Road Race was exemplary for how a victory for one rider is based on the work of a whole team, and how bad luck caused by weather conditions can influence the result by depriving other contenders of crucial support.

The various races of the Australian summer are normally known for sunshine and high - sometimes even too high - temperatures. The images of the peloton passing through burnt bushland at the Tour Down Under, with the smell of fire in the riders’ noses, are only a few days old, but February 1 brought wholly different conditions to Geelong – conditions that much more resembled a Northern European spring classic.

Riders escaped the storm that was feared to descend on the 121-kilometre race, according to weather forecasts, but they still had to race in temperatures rarely found in Victoria at the beginning of February. The heavy rain had a big influence on the result, as it made for a harder race overall, and strong southerly winds added another stress factor, with several crosswind sections just before the finale.

Spratt: My reign at the Women's Tour Down Under had to end at some point

Australian champion and third-place finisher Amanda Spratt (Mitchelton-Scott) described the race: "It was epic out there. We started to get almost a bit cold, and that's when it gets dangerous. Then we had a few crosswind sections from kilometre 97, there was the crash, the roads were a bit slippery, you just had to be so focused the whole time."

The slippery roads contributed to a mass crash on a fast descent about 20 kilometres from the finish, bringing down dozens of riders and holding up others, leaving only 25 riders to chase the breakaway that was still up the road at that point.

"There was that huge, huge crash with about 20km to go, and I was the only Mitchelton-Scott rider left in the front group of 20 or 30," said Spratt. "It was really about trying to be smart and watching Sunweb and Trek, who had the numbers. I had to use my energy wisely. In the end, I am proud of my third place."

Four of Spratt's Mitchelton-Scott teammates had to abandon the race, Georgia Williams and Jessica Roberts having their wounds stitched while Grace Brown and Jessica Allen were taken to hospital for precautionary scans.

Chloe Hosking’s team Rally Cycling were equally affected, as all four of Hosking’s teammates could not continue the race. Until then, Rally Cycling had put in a great share of the work at the front of the peloton. The Australian sprinter and her new team have gelled well, winning the opening stage of the women’s Tour Down Under and fighting for victory on the other stages and in the Race Torquay.

With Hosking in good form, her teammates had been working together with Team Sunweb of eventual winner Liane Lippert to bring back the breakaway, but now Hosking, like Spratt, was on her own. Hosking made the most of the situation and finished in sixth place in the end but, considering her sprint victory in the 2018 edition of the race held in sunshine, she may have wished for different weather on the day.

Team Sunweb, on the other hand, escaped unscathed and had all six riders in the front group as it came into the finale. The team rallied around Lippert, who put in the decisive attack on the final climb to win solo.