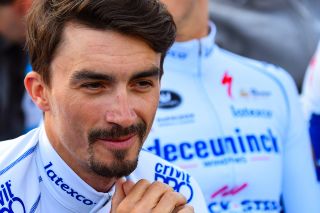 The revised and rearranged cycling season has seen a number of riders alter their goals for when the sport returns from the COVID-19 shutdown. Deceuninck-QuickStep leader Julian Alaphilippe is among them, with the Frenchman heading to Italy when the season restarts in August.

While not part of his original plans for the 2020 spring calendar, the Frenchman will return to Strade Bianche and Milan-San Remo in August. Alaphilippe won both races in 2019, a season which ended up as the most fruitful of his career so far.

Alaphilippe could also race Il Lombardia, which falls a week after Milan-San Remo and two weeks before the start of the Tour de France, though he could take part in the Critérium du Dauphiné instead.

This spring, Alaphilippe kicked off his campaign in South America with the Vuelta a San Juan and Tour Colombia 2.1 before racing the Faun-Ardèche Classic, Royal Bernard Drôme Classic and Paris-Nice ahead of a planned challenge at the Tour of Flanders.

He would've made his debut at the cobbled Monument this spring before heading to the Ardennes Classics, but he'll now have to wait until mid-October for the race, which falls after the Ardennes.

Alaphilippe has already taken part in one training camp with Deceuninck-QuickStep since lockdown restrictions were eased in parts of Europe. He joined a number of team members in Flanders in mid-June, where the squad reconned parts of the Gent-Wevelgem and Tour of Flanders routes.

Last week, he hit the French Alps along with Dries Devenyns and Bob Jungels as the trio previewed the Col de la Loze ahead of the Tour de France, where it will be raced on stage 17.

The next step for Alaphilippe and his team ahead of the season restart will be an 18-day training camp in the Dolomites. There, the team will be based in Val di Fassa to work at altitude before getting the racing underway at the Vuelta a Burgos in late July.