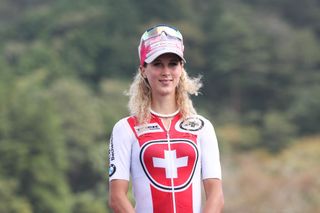 Jolanda Neff (Trek Factory Racing) will take three months away from cycling in order to recover from serious injuries sustained in a crash while mountain biking in Pisgah Forest, near Brevard, North Carolina in December.

The former world champion will remain in the US for another week before returning to her home in Switzerland where she will consult with her physician before making plans to compete again.

"I will not race again until after March," Neff said in a team press release. "I fly back to Switzerland next week to make plan with the Swiss Olympic team doctor, Patrik Noack, on how to go forward. The more I rest, the faster I recover."

On December 22, Neff was training in the Pisgah Forest when she misjudged a downhill corner and came off her bike at a high speed which resulted in a ruptured spleen, a fractured rib, and a collapsed lung.

She was treated at a nearby hospital in Asheville, NC where she stayed for three nights and was then released.

In order to stop internal bleeding in her spleen, Neff's emergency medical team used a technique called embolization, which avoided the need to remove her spleen. However, Neff revealed that her spleen is no longer living, even though it will remain in her body.

"The spleen is important for your immune system, but you can live without a functioning spleen. I have to be super careful now not to burst the plug in my artery. That would start internal bleeding and require emergency surgery."

It's unclear what these injuries mean for Neff's preparation for the cross-country season and her Tokyo Olympic Games bid next summer. She was originally scheduled to compete at the UCI Cyclo-cross World Championships in Duebendorf, Switzerland on February 1.

After consultation with her doctors, however, Neff has made it clear that she will not return to racing until March and that making a full recovery is her priority.

Neff was in hospital for three days following the accident and is currently in the care of her boyfriend and his family in North Carolina.

"I've received so much support and love from everyone, it was really overwhelming," Neff said. "I think I was really lucky in the whole situation with everyone reacting quickly and having the best care possible.

"This is a whole other level of injury, I’m very lucky it wasn’t worse. I am so thankful for the care my boyfriend and his parents have given me."