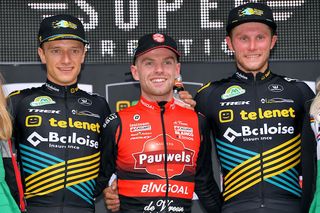 Eli Iserbyt (Pauwels Sauzen-Bingoal) and Ceylin del Carmen Alvarado (Corendon-Circus) won their respective elite men and women races at the opening round of the Telenet Superprestige cyclo-cross series in Gieten, in the Netherlands, on Sunday, giving them the early leads in the eight-round competition.

Iserbyt beat a trio of rival Telenet Baloise Lions riders in the elite men's race, who were led home, 17 seconds off the pace of the Belgian, by Quinten Hermans, with Corne Van Kessel and Lars Van der Haar taking third and fourth, 43 seconds down.

The elite women's race was won by 21-year-old Alvarado – the reigning under-23 European cyclo-cross champion – who beat world champion Sanne Cant (IKO-Crelan) by 55 seconds and Yara Kastelijn (777), who came home another 11 seconds later, to take the women's race.

Road race world champion Annemiek van Vleuten (Mitchelton-Scott) also raced, but could only manage 36th place, well off the pace of the frontrunners.