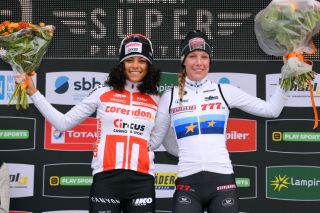 Ceylin del Carmen Alvarado and Annemarie Worst are among the favourites for what should be a thrilling women's race (Image credit: Luc Claessen/Getty Images)

This weekend, the cyclo-cross world will descend on the unfamiliar location of Dübendorf, Switzerland to do battle for the rainbow stripes. On Saturday and Sunday, Cyclingnews will be bringing you race reports, results and news from each race.

Read on to find out how to watch all the races at the UCI Cyclo-cross World Championships via live stream, no matter your location, with ExpressVPN.

While the main attraction of the weekend will no doubt be Mathieu van der Poel's (Netherlands) battle with the Belgian squad, which includes Wout Van Aert, there's plenty more action on both days of competition.

It all kicks off with the junior women and U23 men early on Saturday, before the elite women's race in the afternoon. There, reigning champion Sanne Cant (Belgium) will be fighting with a phenomenally strong Dutch squad, which includes Yara Kastelijn, Ceylin del Carmen Alvarado, World Cup winner Annemarie Worst and Lucinda Brand.

On Sunday, it's the turn of the junior men (including Thibau Nys), U23 women and then, finally, the elite men's Worlds. Can Van der Poel take a third title? Or will Van Aert round off his comeback from injury with a fourth rainbow jersey? His teammates Eli Iserbyt and UCI World Cup winner Toon Aerts will also make their case for victory in a powerful Belgium team.

Check out our bumper Cyclo-cross World Championships preview for more information on the course and contenders, but read on to find out how to watch the action live.

Cyclingnews will bring you full results, reports and news from the Cyclo-cross World Championships throughout the weekend. Follow Cyclingnews on Twitter, Facebook and Instagram for alerts on important stories and action during the races.

The race will be broadcast live around the world on numerous platforms and television networks, as well as on the UCI's own Youtube page. Live streaming coverage starts for the junior races at 11am local time, with U23 races at 1pm and Elites at 3pm local time.

Viewers in Canada and the USA have a host of options to choose from. While the UCI Youtube channel is geo-blocked in the USA, all races are live on NBC Sports Gold, with the Internet streaming network Olympic Channel also airing both elite races live.

If you aren't subscribed to any of the above services, or can't watch the races you want to, sign up to ExpressVPN to follow the action live on Youtube or a separate streaming service.

For those of you in the UK, the BBC will be providing full coverage of the Worlds via their red button service via television, which is also available on the BBC Sport website. You can also watch the races live on the UCI Youtube channel, though the junior races are geo-blocked. Eurosport 2 will show the full races several hours later.

The UCI Youtube channel will geo-block both elite races in France, Germany, Italy, Netherlands and Spain, among other countries.

Finally, if you're staying up late in Australia to catch the action, then both elite races will be on Fox Sports Kayo.