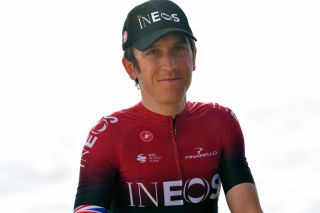 Geraint Thomas has confirmed his pre-Tour de France race schedule, with the Tour de l'Ain and Critérium du Dauphiné on his calendar in the run-up to the race, which kicks off in Nice on August 29.

Speaking to Welsh broadcaster S4C, Thomas said that he's only taking in eight days of racing before starting the Tour, though there will be time for some course recons after the Dauphiné.

Thomas added that a big reason for racing the Tour de l'Ain is the fact that stage 3 of the race shares many of the same roads as stage 15 of the Tour de France, with the Col de la Biche and a summit finish on the Grand Colombier on the menu for both.

"The team start racing on August 1, but for me, there's a three-day stage race [Tour de l'Ain] in France, which one of the stages is the same as the Tour, so I'll start there," he told S4C.

"Then I'll have two days off and then we'll do the Dauphiné, which is the traditional last race before the Tour anyway. That's shortened, it's normally eight days but now it's five. I'll do a couple of recons after that, and then there will only be a week and then we'll go to the Tour."

Chris Froome and Geraint Thomas in contention for World Championships

Thomas, who won the Tour in 2018 and finished runner-up behind teammate Egan Bernal last year, said that he has missed racing this year, while also keeping the COVID-19 pandemic in perspective. The Welshman hasn't raced since the Volta ao Algarve in February, where he finished 21st overall.

"Missing the racing part was disappointing but there was a lot bigger things going on, so you can understand why," he said. "Everyone's way of life drastically changed, but luckily for us, I went back to Cardiff for 50-odd days in the end.

"I was still able to go out on the road and train, and spend a bit of time with the family, which I never normally would. And especially having a young boy at home, Macsen, that was a nice positive from it.

"I'm getting on a bit now, I've got maybe three, four, five years left so I just want to make the most of those years and race my bike and enjoy it," added the 34-year-old. "It was tough going but there's a lot of people who are in worse off positions than us."

In lieu of real racing, Thomas has logged plenty of time on the Zwift virtual platform during lockdown, taking part in April's Team Ineos eRace up the Alpe du Zwift, June's Team Ineos eRace Classic and stage 2 of the Virtual Tour de France earlier this month. Back in April, he rode three consecutive 12-hour shifts in his garage to raise £375,528 for NHS charities.

Thomas said that racing on Zwift has been a fun experience, and has also helped with training, given that he has been competing against his fellow pros.

"It's not the real thing, but it is very realistic," he said. "The Zwift races have definitely helped me get more out of myself, because you're racing against your teammates online. Even if you're not that up for it to start with, as soon as you get going, that competitiveness comes out anyway and you all end up racing hard, so they're definitely a good workout.

"I'll probably be a bit like 'ah whatever, we'll see how it goes', but as soon as you get going, you do some stupid attacks. But we'll just have a bit of fun with it, it's definitely a good alternative to rolling around on your own."

"It's good to see them working hard," he said. "To see them racing again is fantastic. It's great for team morale and a great thing to be doing for everybody.

"Camaraderie, supporting each other, and the human factor is very important at this time. Anything you can do to connect people together – including the fans – is well worth doing."