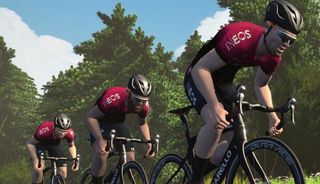 “There was supposed to be a plan, but in the end I felt it was better to just go for it, why not? It worked out," Dennis said in a post-race interview with the team.

“It was a good little hit out. I spotted Cam (Wurf) with me and I couldn’t let him sit on my wheel for too long, so I pushed a bit harder and dropped him, then I could sit on my TT pace from there," Dennis said.

“It’s a time when nobody is allowed to ride with anybody, so we’re lucky to have technology like this so we can do something for the fans to keep them across what we’re doing and how we’re training."

The Team Ineos roster was divided into six teams of five riders each on a 'Tour of Fire and Ice' course that totaled 25km and finished with a 12.2km climb replicating l'Alpe d'Huez.

Riders representing five of the six teams established an early lead. In the move with a 20-second advantage were Chris Lawless, Ben Swift, Luke Rowe, Filippo Ganna and Ian Stannard. Eddie Dunbar's team found themselves left out and were so strapped with the chase to keep the escapees in check.

The virtual weather in Watopia turned gray as the leaders headed into a brief gravel section, but it did not appear to affect the race as the leaders maintained gap of just over 20 seconds. Stannard joined Lawless off the front of the break, which held just 17 seconds over the peloton, where gaps were starting to form.

With 10km remaining, it was Lawless and Swift at the head of affairs, but two-time and reigning time trial world champion Dennis took the moment to attack, powering up to 450 watts and pulling within reach of Swift as Lawless began to fade.

Dennis put in another effort and flew past Swift, while Cameron Wurf sailed into the second spot. Chris Froome, riding in France, started moving up the peloton into fourth as the final climb up Alpe du Zwift approached. Dennis' continued pace setting dropped all but Wurf, and the two leader soon held a 20-second gap over the chase, which was again falling into groups.

Eddie Dunbar and Pavel Sivakov took up the chase from there, with Dennis up half a minute on the young duo. Further down the slope were Kwiatkowski and Froome.

Riding at 450-460 watts, the double world champion continued to add time to his Zwift rivals. As the leaders moved into the virtual snowline on the climb, Egan Bernal and Gerraint Thomas languished at more than two minutes back, while Froome stuck near the pointy end of the conflict.

Dunbar continued to lose time to Dennis and was at 49 seconds with less than two kilometres remaining, while Kwiatkowski surged into third ahead of Wurf and Sivakov.