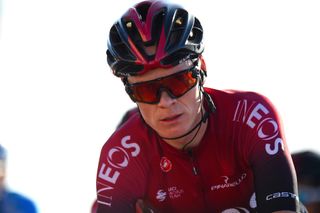 After months of speculation surrounding a possible location change, the Great Britain team for the World Championships can finally take shape, with Chris Froome and Geraint Thomas both in contention for a place.

The event was scheduled to take place in Switzerland over a hilly course but, with the COVID-19 pandemic affecting racing, the UCI was forced to look for alternatives, with a flat course in the Middle East mentioned as one solution.

However, with the Worlds now confirmed, as planned, for Aigle-Martigny from September 20-27, Great Britain road coach Matt Brammeier can focus on the type of riders he will need for his six-man team.

"Luke Rowe is also in the mix and Alex Dowsett has been focusing a lot of the TT as well. The priority for me is having a motivated group.

"To be honest, it’s been no surprise about Switzerland. We’ve not had any official communication from anyone, other than what we’ve seen in the media, and we’ve just been planning for Switzerland all this time. We’ve not really looked at the Middle East at all."

Selection for this year’s World Championships is complicated due to the lack of racing athletes have had since mid-March. Racing programmes are set to resume properly in the coming weeks, with the WorldTour scheduled to recommence at the start of August but, with the Worlds and final stage of the Tour de France overlapping, Brammeier will be looking to make the final selection for his team as late as possible.

"We had a call yesterday and we’re in the final stages of clarifying what the selection is going to look like. The nuts and bolts won’t be too dissimilar to before but we’re just going to have to account for results from last year and expand on that element of our documents," he said.

"That’s really the only thing that’s changed.  It’s going to be a bit more difficult when it comes to selection and we’re going to have to communicate a bit better with what’s going on and then just catch up with the riders to see where their focus is, to be honest."

One benefit stemming from the new-look race calendar is that the gap between the Tour de France and the World Championships is likely to be similar when the Tour and the Olympic Games back onto each other in 2021. That gives teams like Great Britain the chance to use this year's Worlds almost like a test event when it comes to selection and preparation.

"We don’t have an official long list but we have a good group and we’re motivated because it’s our last shot before Tokyo to try and get our climbing group together.  It’s going to be a beneficial race for us and the lads who were thinking about Tokyo have all put their hands up and said that they’re motivated to race Worlds," Brammeier said.

"I’m sure that a handful of them will be coming out of the Tour and again that offers a good opportunity because the window between the Tour and the Olympics is going to be similar next year, so we should learn a lot from that."