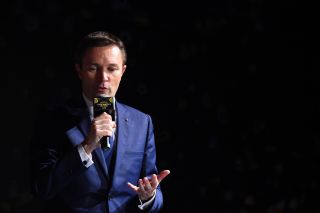 UCI president David Lappartient has said that it would be a "disaster" for cycling if the Giro d’Italia and Tour de France cannot take place due to the spread of the Covid-19 coronavirus in Europe.

Giro organiser RCS Sport has already been compelled to postpone Strade Bianche, Tirreno-Adriatico, Milan-San Remo and the Giro di Sicilia, and all sporting events in the country have now been suspended until April 3 after the Italian government enacted stricter measures to combat the spread of the virus.

The measures raise questions about the feasibility of the 2020 Giro, which is scheduled to get underway a little over a month later. The Grande Partenza is fixed for May 9 in Budapest, with the race’s first stage on Italian roads due on May 12, when the caravan arrives in Sicily. The route then travels northwards ahead of the finish in Milan on May 31.

"That would be a disaster for our sport of course if we can't have the Giro d'Italia or the Tour de France," Lappartient told Reuters.

Pinot: coronavirus situation has been blown out of proportion

The Frenchman conceded that the tight timeline means that the Giro is at risk, but he expressed greater optimism that the worst of the crisis might have passed ahead of the Tour de France, which this year gets underway a week earlier than normal due to the Tokyo 2020 Olympics. The Grand Départ is fixed for June 27 in Nice.

"Maybe the gap of two months in between will have also some consequences on the virus. Maybe in summer we hope so, that it will after the summit of the peak, decrease," Lappartient said.

"So we hope that these races will be able to take place. But we are, due to the situation in Italy, a little more worried today with the situation with the Giro d'Italia.

"We know what the decision from the Italian government is until April 3, but who knows what will be the situation after. So there is a potential risk that the Giro can be cancelled."

Paris-Nice, which is organised by Tour owner ASO, is currently taking place despite the growing number of cases in France – 1,412 as of Monday afternoon – and despite the withdrawal of seven WorldTour teams beforehand. In response to the French government's prohibition on public gatherings of over 1,000 people, ASO has blocked the start and finish of stages to the public.

"As long as they say it is safe for the wider public, we see no need not to race. But I fear that could all change in a matter of days," Trek-Segafredo directeur sportif Steven de Jongh told ANP.

After Paris-Nice, the focus will shift to the cobbled Classics. Belgium thus far has 267 recorded cases of coronavirus and the Belgian government security council is set to meet in Brussels on Tuesday to discuss its response to the virus. Flanders Classics CEO Tomas Van Den Spiegel nonetheless evinced optimism that the races could proceed.

"There is a feeling that we are managing the coronavirus crisis well as a country," he told Het Nieuwsblad. "But, of course, we are working on it.

"Together with virologist Marc Van Ranst, we have compiled a list of measures to protect both riders and the public. We must be ready to implement the measures if necessary. Although of course we do not know how the situation will evolve."

The start of the 2020 Giro, meanwhile, is now just 60 days away, but race director Mauro Vegni is reluctant to countenance the prospect of the corsa rosa being cancelled for the first time since 1945.

"Cancelling the Giro would create a very complicated situation not only for cycling and for sport, but for the whole country," Vegni said, according to Sporza. "I don't even want to think about such an eventuality. The damage would be truly immense."