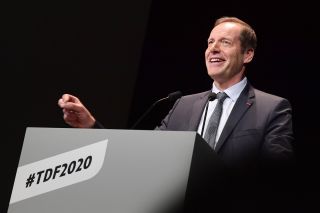 Christian Prudhomme has insisted that Paris-Nice will be completed despite the continuing spread of the Covid-19 coronavirus in France. The race has reached its midway point after Wednesday's time trial in Saint-Amand-Montrond with Max Schachmann (Bora-Hansgrohe) in the yellow jersey.

"I can simply say that at this instant, on Wednesday afternoon, we have received assurances that Paris-Nice will 100 percent arrive in Nice," Prudhomme said, according to Le Parisien. "That’s the reality right now, but the race will indeed reach Nice."

France has recorded over 1,700 confirmed Covid-19 cases, and president Emmanuel Macron is due to make a televised national address on the situation on Thursday evening. It is expected that France will declare a stage 3 Covid-19 epidemic in the coming days.

The country has already imposed some measures to contain the spread of the coronavirus, placing restrictions on public gatherings and sporting events. On Wednesday evening, Paris Saint-Germain will play behind closed doors in the Champions League, while the French rugby team’s Six Nations game against Ireland this weekend has been postponed.

The French sports ministry gave its consent for Paris-Nice to proceed last week, though organiser ASO has taken some actions in light of the Covid-19 epidemic. The podium and signing-on ceremonies have been curtailed and spectators have been distanced from the start and finish areas.

"It's the very essence of our sport to mix with people, so that is heartbreaking," Prudhomme said. "But these are exceptional measures for exceptional circumstances. And the public understands that well, you know. The message has been well received.

"We were worried at one point that it [Paris-Nice] wouldn’t start. On Sunday at 4:30, after the finish of the first stage, I said to myself, 'We’ve just won a battle, but there are seven left.'"

Asked if he was concerned about ASO’s other marquee races, namely Paris-Roubaix (April 12) and the Tour de France (June 27-July 19), Prudhomme said, "We’re 100 percent concentrated on Paris-Nice. I can’t say anything else, because that’s the reality. For the rest, we’ll respect the directives, if there are any."

Prudhomme was questioned on the same matter by France Télévisions earlier on Wednesday. "We’re really like tennis players, going point by point, game by game, set by set," Prudhomme said. “Paris-Roubaix will be the next dossier after this. As for the Tour de France, only two world wars have stopped the Tour de France."