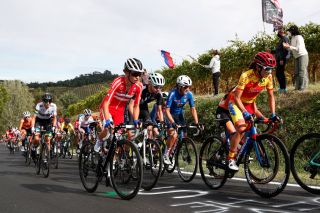 Denmark's Cecilie Uttrup Ludwig was unable to change gears going over the final climb during the elite women's road race at the World Championships in Imola, Italy, and was unable to be in the mix for a medal, or at least a higher-placed finish, trailing home in eighth place.

"We're still trying to figure out what happened," Danish national coach Tayeb Braikia told BT.dk on Saturday evening. "For some reason, Cecilie wasn't able to shift, and those who were watching on TV would have seen that she was riding in a gear that was too low.

"When we checked, we found that there was no power in the battery, which was particularly bad when it came to the descent [off the final climb]," he said.

Uttrup Ludwig uses Shimano Dura-Ace Di2 electronic gears on her FDJ Nouvelle-Aquitaine Futuroscope team Lapierre bike, and the gears use a small battery to shift via conventional brake/gear levers on the handlebar.

If the battery runs out of charge, a rider is left stuck in one gear, which appears to be what happened to Uttrup Ludwig, although it appears to have been some kind of mechanical failure rather anyone forgetting to charge the battery, according to Braikia.

"I asked the mechanics about that, but it's the last thing they check before they go to bed," he said. "When we looked at the other riders' bikes, they were fully charged. And on a full charge, there's usually enough power for several months' worth of riding."

The two Danish national squad's mechanics have apparently been left just as upset as Uttrup Ludwig.

"They feel really terrible about it," Braikia said. "When something goes wrong with the bikes, they take responsibility for it, even if they haven't made a mistake. And we can't blame them, as we still don't know what happened."

Braikia said that he still hadn't talked to Uttrup Ludwig, who finished the race too upset to talk to anyone.

"I can't really say if she might have been in contention for a medal otherwise, but it certainly prevented her from being able to compete for places four to eight.

"With the form she's in after the Giro d'Italia, we knew that she was capable of a medal, and on the penultimate lap we still thought that it was possible, so I feel very sorry for her," he said.

"Cecilie is really upset about what happened," Braikia added. "We all are, but she's particularly upset, and so is taking some time on her own."