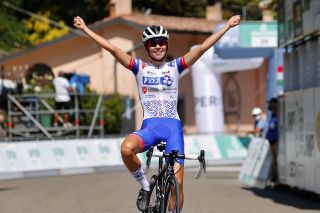 "Finally, we're being taken seriously," she said, "and they don't think our uteruses will fall out if we ride long stages."

Speaking in a video interview, Uttrup Ludwig spoke about her chances at the Giro Rosa – which starts in Grosseto, Tuscany, on September 11 and runs over nine stages until September 19, when it finishes in Motta Montecorvino, in Puglia, in south-east Italy, on September 19.

"I hope to have good legs – I think everyone does – and I hope that we as a team can come together, as this is my first year on the team, and it takes something else to do a stage race like the Giro," Uttrup Ludwig said.

"I hope to be at the sharp end of the race. I feel like I've had a good build-up to it so far, and I'm just ready to put the hammer down," she said, using what has become the 25-year-old's catchphrase since an interview with her following the 2019 Tour of Flanders went viral.

While Uttrup Ludwig can't really take sole credit for helping to popularise modern-day women's cycling, despite her numerous impassioned interviews – and that 'Bam! Let's put the hammer down!' Flanders one, it certainly hasn't done her own popularity any harm.

"After that Flanders interview, I'd be out training and people would shout, 'Cille – put the hammer down!' and I think it opened a lot of people's eyes to the existence of women's racing, and I feel that, as time goes by, we are gaining a lot more respect," she said.

"For a long time, I've also been trying to say that I've been training as much and as hard as the guys – and I've been training with them – and so I do wish we'd get the same respect and recognition as them, because I think that, in the end, what women's cycling needs is the exposure, and getting on television.

"Just this last week, with the GP de Plouay, the European Championships and La Course being televised – and men not doing any interviews – people were able to watch us racing, and I gained, like, 3,000 or 4,000 new followers [on social media], which shows that we need women's cycling out there in the living rooms, as then people can see that it's so much fun, and the riders are firing and attacking each other, and it's not boring," Uttrup Ludwig said.

"Women's racing is fire from the gun because we only have 140km to get people tired, so it's fun racing."

The long fourth stage at the upcoming Giro Rosa, in particular, has whetted the Dane's appetite as something different, and seems to be a step towards the occasional longer, tougher stage or one-day race.

"It's so cool, and, like, yes – finally we're being taken seriously, and they don't think our uteruses will fall out if we ride long stages, or if we do long climbs," Uttrup Ludwig said, unafraid to speak her mind.

"This is what we need, especially after last week when we were doing only 90km races, or up to 100km. It just felt a bit sad – as though they needed to shorten the women's races so that they were finished before the men's races, because the men's races are the most important. So it's really cool to have these longer stages because I think we deserve to have some proper distances, and not junior distances," she said.

However, as Uttrup Ludwig mentioned, professional women's teams and riders continue to be up against it when it comes to television coverage of racing, and the 2020 Giro Rosa looks as though it won't be any different.

"It's our Grand Tour, and people say, 'I want to watch the Giro,' and you say, 'Yeah, you can watch the highlights at six o'clock in the evening,' and I think that's a bit sad."

Uttrup Ludwig named the Women's Tour – the women's Tour of Britain – as a race that enjoys great support from both the organisation and the communities it passes through, and holds it up as an example.

"You feel really appreciated that you're there, as they take women's cycling seriously, and they're so good at involving the community," she said. "They say to schools, 'Come out and watch the bike racing,' so you'll have huge crowds, and you feel like you're riding at the big men's races.

"And then you go to the Giro Rosa and it's, like, there's no live coverage, and hardly anyone out there on the course. It's just really sad, because I think if people knew we were coming and there was live TV, people would watch it."

"It has mega-short climbs, so if you come out of the Giro well, and have stayed on your bike, I think the Imola course looks so nice. I'm already excited."

Uttrup Ludwig was also asked about the inaugural edition of the women's Paris-Roubaix, which takes place on October 25.

"It's an epic race for the men, and so will be for the women, too," she said.

"It was also unexpected, so it's going to be mega-epic, and is a race I've been watching since I was five years old, so it's pretty cool.

"Four years ago, I was in Belgium for a month or two, and we were staying pretty close to the Arenberg forest, so we rode that Trouée d'Arenberg section of cobbles – and it was epic."

After taking victory at the Giro dell'Emilia in mid-August, Uttrup Ludwig should be one to watch at both the Giro Rosa and the Worlds, and will no doubt be putting the hammer down at Paris-Roubaix in October, too.