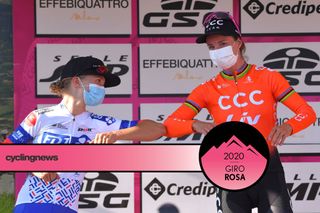 Cecilie Uttrup Ludwig (FDJ Nouvelle-Aquitaine Futuroscope) has gradually clawed her way back into contention for the general classification podium at the Giro Rosa with a near stage 3 win in Assisi on Sunday. The Dane finished second on the steep uphill finish to Marianne Vos (CCC-Liv) but now sits just a minute away from the overall podium.

“My team was great," the 25-year-old Dane said. “They gave me so much motivation because they were all there at the end and leading me out. I stayed calm and tried to deliver and give back to them. I am happy with the result, and I got some more seconds today, slowly getting seconds here and there.”

In the team time trial that opened the Giro Rosa, Uttrup Ludwig conceded valuable time to her general classification rivals. However, she made up lost ground with a fourth place on stage 2, a day that saw big time gaps, and again on stage 3 on the climb to Assisi.

Stage 3 started with a hilly section, but after a very hard stage 2 and with the 170km stage 4, the longest women’s race since the inception of the Women’s WorldTour four years ago, to come the next day, nobody wanted to invest too much too early, with most teams content to wait for the finishing climb.

“The stage unfolded as we expected, said Uttrup Ludwig. “It was pretty controlled in the beginning when we were climbing, up and down. Then we hit the flat part towards the end of the race, it was still pretty quiet with only a few attacks. Everyone was ready to go for the uphill sprint, putting their climber in the best possible position. It was very chaotic on the last 10 to 20 km, a bit of crosswind, lots of lead-out trains right and left, and then it was just super hard because it was a wall at the end!”, she exclaimed.

This final climb was the narrow Piaggia di San Francesco, underneath the Saint Francis basilica overlooking the UNESCO World Heritage city of Assisi. Although a short climb at less than 700 metres, the average gradient was over 13 per cent, with a maximum gradient above 15 per cent. Less than four weeks ago, Uttrup Ludwig won the Giro dell’Emilia that finished on the very similar San Luca climb in Bologna.

“Elisa Longo Borghini went quite early, we were just following, and with 200 metres to go, we were side by side. After hitting the 100-metre mark, we all started sprinting and giving everything we had. For me, that was enough for second place, Marianne was just flying up the wall”, the Danish climber recounted the finish.

In the last couple of days, Uttrup Ludwig has proven that she has stepped up a level from the last years. Two years ago, she finished sixth overall in the Giro Rosa – now she is among the absolute best both on longer climbs as well as on short, punchy finishes. I

In the general classification, she is now trailing 1:01 minute behind third-placed Katarzyna Niewiadoma (Canyon-SRAM). If Uttrup Ludwig can perform consistently like she did on the last two stages, the overall podium is not out of reach for her.