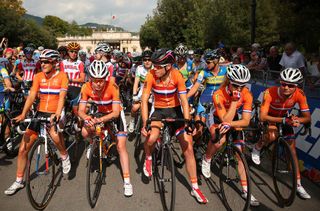 The Dutch cycling federation, KNWU, announced it would revisit its plans for restarting the national cycling calendar after the Netherlands government said it would lift some measures to control COVID-19 two months earlier than expected.

On Wednesday, Prime Minister Mark Rutte announced the ban on contact sports and other restrictions would be lifted beginning July 1 as the country recorded its first day with no deaths due to the coronavirus since the pandemic began.

"During the press conference on June 24, the cabinet had good news for Dutch sport," the KNWU said in a statement. "From Wednesday 1 July, it is no longer necessary to keep a distance of 1.5 meters when exercising... This also makes it possible to organize cycling races again."

The federation advises cyclists to "use common sense" when training once the distancing requirements are lifted, and said that event organisers should expect the permitting process to take longer than in past years as there will be additional safety requirements such as 1.5-metre distancing for race officials, podiums, and spectators.

The KNWU anticipated distancing requirements to remain in place through September 1 and had an action plan that was largely ready. They expect to have more concrete guidelines to announce next week.

"We are adapting our current advice to the new relaxation from the cabinet and the general sports protocol of the NOC * NSF," the KNWU said in a statement. "Our first priority is to start national competitions such as the Classics and criteriums. We expect that the club races will precede the national events in the coming period."

What the announcement means for the international calendar remains to be seen: the men's and women's Amstel Gold Races are scheduled for October 10 and the Boels Ladies Tour for September 1-6 in the UCI's revised 2020 road calendar. There are no other Dutch UCI races currently on the schedule, and the stages of the BinckBank tour that were due to be held in the Netherlands were called off and the race shortened to five days.