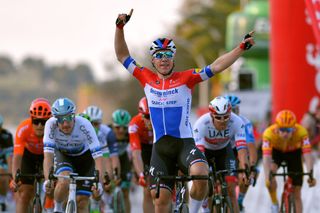 The Dutch Cycling Federation has cancelled the 2020 Dutch National Road Championships, joining the ranks of races cancelled due to the COVID-19 coronavirus pandemic.

The news comes as the Belgian National Championships also looks in doubt, while the respective federations in Italy and France also face a waiting game before their national governments consider future steps to take with their lockdown measures.

The Dutch races were originally due to be held in Drenthe on August 22 and 23. Current government measures prohibit sporting events in the country until September 1, and the National Championships will be reassigned to next year in Drenthe.

"There seems to be no space for the elite National Championships," Dutch federation director Thorwald Veneberg told Sporza. "The calendar for this autumn is already a calendar of hope. The question is whether such large events should be organised by then."

The Belgian National Championships – set to be held in Anzegem and Koksijde on August 20 and 23 – are also in doubt, with director of Belgian Cycling Jos Smets saying that it's not realistic to hold the races on their current dates.

"The note from the Flemish sports minister Ben Weyts about the restart of sporting competition is clear – from August 1, only events with a limited number of participants and spectators (2,000) are possible," Smets told Het Laatste Nieuws.

In Italy, organiser of the 2020 Italian National Championships Filippo Pozzato has cast doubt on whether the races could be run behind closed doors. The races were due to be held on August 21 and 23, but Pozzatto told Tuttobiciweb that it could make sense to postpone them to 2021.

"There is a calendar drawn up by the UCI but then the Ministry of Health will give the green light," said Pozzato. "The dates would be ideal, but the question is: if we have restrictions, if we have to run behind closed doors, does it really make sense to run the races? A race without an audience doesn't make sense to me, and I think athletes also agree on this.

"I'm in weekly contact with [Italian Cycling Federation president] Renato Di Rocco, but almost nothing depends on us. As soon as we get a protocol with various health rules to follow, we can make a decision.

"Changing date is not a problem, because it won't change anything for the sponsors. They supported us to create a nice event with a big audience. If this isn't the case, then perhaps it would make more sense to postpone everything to next year."

The French National Championships could also be postponed, with the French federation waiting until June 2 for further government advice before possibly delaying the races until October.

The races are due to be held on August 20 and 23 in Plumelec, a week before the start of the Tour de France. French Cycling Federation vice-president Ludovic Sylvestre told l'Equipe that the organisation is working to find a solution to hold the races, while federation president Michel Callot said that there are few solutions to accommodate a postponed National Championships.

"In October? Why not!" Callot told l'Equipe. "But that doesn't leave a lot of solutions. It also implies that not all French riders will be able to start [because of other races]. And then, there's the fact that the French National Championships come before the start of the Tour – it's always a symbol."