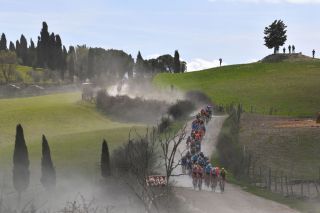 Following confirmation that the Strade Bianche races have been cancelled, several other teams have announced they will not travel to Italy for next week's Tirreno-Adriatico and Milan-San Remo.

The organisers of Sunday's GP Industria & Artigianato in Tuscany have also announced their race has been cancelled due to the impact of the Italian governmental decree that only allows sporting events without the public, to safeguard their health and try to contain the spread of the coronavirus.

There are more than 3,000 confirmed cases of the coronavirus, with 107 deaths confirmed and 295 people in intensive care in hospital. More than 80 per cent of the cases are in the northern Lombardy, Veneto and Emilia Romagna regions, but isolated cases are being discovered across Italy hour by hour, putting the health service and local authorities under huge pressure, with close to 50 in Tuscany.

RCS sport has not yet cancelled Tirreno-Adriatico and Milan-San Remo, but the races are unlikely to go ahead due to the difficulties of respecting the governmental decree. Football matches will go ahead this weekend, with no public allowed in the stadia, and the organiser of the Ski World Cup finals in Cortina hope to keep their event alive. However, the nature of road racing means it is very difficult to limit contact between riders, the public and amongst race staff.

Some teams have opted not to wait for RCS Sport and cancelled their complete Italian programme, with women's teams also opting to miss the Trofeo Alfredo Binda on Sunday, March 22. They believe their decision is justified and satisfies the valid reasons outlined by the UCI on Wednesday.

Groupama-FDJ, UAE Team Emirates, Team Inoes, Astana, Mitchelton-Scott, EF Pro Cycling have already pulled out of Tirreno-Adriatico and some from Milan-San Remo. Groupama-FDJ and UAE Team Emirates cited a lack of riders and staff because some of the team remain in quarantine in the UAE.

UAE Team Emirates, Team Ineos, Astana, CCC Team and Mitchelton-Scott have confirmed they will not ride Paris-Nice. Race organiser ASO is working to replace them with other teams, while expanding team sizes to eight riders to accommodate some of the riders left with competition due to the problems in Italy.

Jumbo-Visma announced they would not ride Strade Bianche even before RCS Sport made their decision. Now the Dutch team have said they will not ride Tirreno-Adriatico and Milan-San Remo, citing medical advice from the Dutch Ministry of Foreign Affairs and after consulting with a delegation of our riders and staff. The team is still set to ride Paris-Nice, which starts on Sunday in Paris with Primoz Roglic and George Bennett on the race entry list.

Team Sunweb culled their Italian programme for both their men's and women's teams.

"The team makes this decision in light of the exceptional circumstances surrounding COVID-19," Team Sunweb said in a statement.

"We acknowledge our responsibility to the areas in which we would travel, and the immense pressure that the Italian authorities are currently under in what is a fast-evolving, incredibly difficult situation. We have a duty of care to our riders and staff and to the wider communities in which we compete. This situation goes beyond cycling, and with this decision we as a team want to minimise any impact that we may put on these communities through potential illness."

"As the team manager, I cannot risk the health and integrity of our staff when the health situation is so unstable in Italy, and many legitimate questions have been raised within the team," team manager Vincent Lavenu said.

"Sporting interests should not overshadow prudence and wisdom when it comes to public health. We are very sorry for the organizers of these legendary races and we have informed them this morning of our decision."

In contrast the Israel Start-Up Nation team said they ready to ride Tirreno-Adriatico if the race goes ahead and Paris-Nice.

"We have concluded that as long as we can ensure that races can be held safely, following all advice and approvals by local health authorities, the UCI and organizers, our team will continue racing fully motivated," team manager Kjell Carlström said in a Facebook post.

"Team ISN has given everyone in the team a personal say on this matter. The team notified the riders and staff that their participation in races is voluntary and up to them. “Anyone and everyone in the team can tell us if he or she is not comfortable to go to a certain race, and we will totally respect that decision."