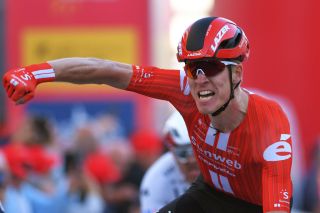 Cees Bol will lead Sunweb's hopes in the bunch sprints at this year's postponed Tour de France, which starts in Nice on August 29. The Dutchman is therefore effectively the team leader for the flatter stages, even if there's no true leader of the entire eight-man squad, which teammate Tiesj Benoot has described as this year being made up of 'freelancers'.

The omission from the Tour squad of Sunweb sprinter Michael Matthews was as much a surprise to him as it was to everyone else, but the 29-year-old Australian has been told by team management to instead concentrate on this year's rescheduled Milan-San Remo (August 8), Il Lombardia (August 15) and the Giro d'Italia (October 3-25).

It leaves 24-year-old Bol with a considerable amount of responsibility at the Tour, having only made his debut at La Grande Boucle last year, when he was a non-finisher due to a crash on stage 16.

However, Bol said that his selection for the Tour squad hadn't come as a complete surprise.

"Of course, there had already been some talk about," he told Dutch newspaper the Algemeen Dagblad earlier this week. "It's nevertheless fantastic to be going. The Tour is very special, and I'll be going there to do my best in the sprints.

"There's a bit of pressure, but no one's said that I must win a stage," said Bol. "Of course, I would really like to, but there are also plenty of opportunities for our team in the somewhat tougher stages."

Bol is currently on what is the first altitude training camp of his career, together with all of his Sunweb teammates, at the Kühtai ski resort in Austria.

"The first few days don't really count as it takes time to get used to the altitude, just doing some training rides with the group," he said.

"Due to corona, the team is divided into groups," Bol explained. "The Tour team, for example, eats in a different room to the other groups. We do still speak to each other, but we keep our distance, and preferably do it outside. You have to limit the risks as much as possible, and in a positive case, [it means] you don't have to isolate everyone immediately."

He looks set to restart his season alongside Matthews at Milan-San Remo, but Bol has already tasted victory this season at the Volta ao Algarve in Portugal in February, where he outsprinted Alpecin-Fenix's Sacha Modolo and Deceuninck-QuickStep's Fabio Jakobsen to win stage 3 from Faro to Tivera. He then took two top-five finishes on stages of Paris-Nice in March, ahead of the halt of competition due to the coronavirus pandemic.

A week before the start of the Tour, Bol says that he may return to the Netherlands for the National Championships road race, although it's by no means certain.

"If safety measures regarding corona aren't going to be 100 per cent, the risk may be too great," he said. "I'd like to ride there, but I won't risk my Tour participation."