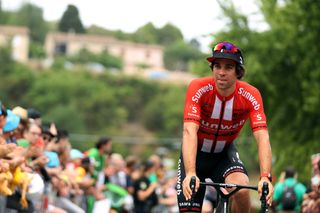 Team Sunweb coach Marc Reef has given a reaction to the news that the German squad's star rider Michael Matthews was surprised by his schedule for the resumed 2020 season.

The Australian will miss the Tour de France, Strade Bianche and Ardennes Classics, which he was slated to ride before the COVID-19 pandemic put the season on hold, and will now target the Giro d'Italia and Milan-San Remo instead.

Matthews: We all have to make sacrifices to save the sport we love

In response, Reef told Wielerflits that riders have input into their race schedule, though ultimately the team is responsible for programmes, adding that he thinks the scheduled programme is the best way to achieve their goals.

"The riders provide input when putting together the programme," Reef said. "But it's up to the team to make the choice.

"We'll go with Michael for stage wins at the Giro, and he'll also ride San Remo, Lombardia, the GP Plouay and Tirreno-Adriatico. It may be a different programme than he had in mind, but it's a very nice series of races. The Giro is also very important to us."

Matthews has said that the team's management didn't yet explain to him why his programme has changed so much from his original plans, though he was positive about riding the Giro, a race about which he said: "I've been trying to fit it into my programme since 2015 now."

The team will instead send 24-year-old sprinter Cees Bol to the Tour, with Tiesj Benoot, Søren Kragh Andersen and Nikias Arndt also set to take part.

"But, yeah, I think I just have to change my mindset now on the new goals that I have and try to make the most of them."

Reef, meanwhile, acknowledged that Matthews is still among the team's leaders, but added that the way races have been distributed among the team will give them the best chances to win.

"We are responsible for the entire team; we're a team and we take everything with us. With this distribution of the programme, I think we have the best chance of achieving our goals."

Matthews will ride the Giro d'Italia, which he raced in 2014 and 2015, alongside cliimbers Sam Oomen and Wilco Kelderman. The two Dutchmen have reportedly been told they can leave the team next year, with Ooman linked to a move to Jumbo-Visma as Sunweb targets AG2R GC man Romain Bardet,