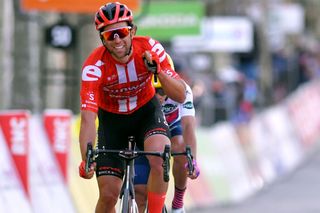 Sunweb have delivered Michael Matthews a curve ball a month out from the resumption of the 2020 season, making significant changes to his race programme that for the first time in five years won't include the Tour de France.

From the outset of the season, and throughout lockdown, the 29-year-old Australian had been preparing for, and involved in discussions around, the Ardennes Classics and the Tour, which he now won't start.

It is an added strain for Matthews, who believes the recommencement of competition should be delayed longer and is "scared" about the potential health and safety consequences of a premature return amidst a global pandemic.

Team Sunweb announced their race line-ups on Wednesday, naming Matthews as a starter at Milan-San Remo on August 8 and the Giro d'Italia from October 3-25. He was not included in the group that will ride the Tour de France from August 29-September 20 and then the Classics in October.

The three-time Tour stage winner and 2017 green jersey winner will also not join teammates on a team training camp in Austria, and will instead prepare for Milan-San Remo, his first race back, at home.

Matthews: We all have to make sacrifices to save the sport we love

Speaking to Cyclingnews from his base in Livigno, Italy, after the announcement, Matthews, who last year extended his contract with Sunweb through to the end of 2021, said he was due to speak with team management on Thursday or Friday to ascertain what his revised objectives will be.

"I have the Giro, which is nice. I love the Giro. I've been trying to fit it into my programme since 2015 now. I have amazing memories of the race, obviously, so I wouldn't say I'm missing out. I'm excited for the Giro, I can say."

Matthews has virtually kept to the same race programme since joining Sunweb in 2017, opening his season at Paris-Nice and then focusing primarily on the Classics, the Tour and the one-day WorldTour races in Canada. Last year, he mentioned the possibility of starting the Giro for the sake of change, but was as surprised as pundits regarding his omission from the postponed Tour, which Dutch teammate Cees Bol has been named for, given his preparation and instructions up until now.

Matthews said Sunweb management haven't yet explained why his programme has been changed.

"But, yeah, I think I just have to change my mindset now on the new goals that I have, and try to make the most of them.

"I still have some beautiful races, with Milan San-Remo, Lombardia and Tirreno-Adriatico, which are ones that I haven't had the biggest success in so far. I've got to think of it like that, and try to make the best out of the ones that I have," he repeated.

As a neo-pro making his Tour de France debut last year, Bol was granted opportunities to sprint for himself in what was a frustratingly close-but-no-cigar campaign for Matthews, who won the bunch sprint for second on stage 3 behind Deceuninck-QuickStep's Julian Alaphilippe and placed fourth on two other individual stages.

Matthews has tasted success in his two previous Giro outings. On his race debut in 2014, he marked a stint in the maglia rosa, won one individual stage and the opening team time trial in Belfast, Northern Ireland, with Orica-GreenEdge. He then went on to replicate the performance in 2015.

The Giro, before the coronavirus pandemic saw racing suspended, had attracted most of the WorldTour's top-flight sprinters, and even enticed Peter Sagan (Bora-Hansgrohe) to make his debut, with a bounty of stages for the fast-men and puncheurs on offer.

In the meantime, Matthews has joined a growing chorus of WorldTour figures, including Deceuninck-QuickStep manager Patrick Lefevere and Lotto Soudal rider Jasper De Buyst, who have spoken on and off the record of their concerns about resuming WorldTour-level competition from August 1.

Earlier this week, De Buyst told Belgian media that, in a peloton of 150-odd riders, "it is impossible not to ride in each other's snot" – a problem given how coronavirus is transmitted.

Matthews is especially mindful of the health and wellbeing of his wife and young family, who wear masks whenever they go out, and is fearful not everyone will or can be as vigilant on the road.

"I can't guarantee the rest of the peloton is doing this, which scares me because they might think they're safe because they're athletes, they're fit, they're healthy, they don't have a wife or kids at home that they need to think about and they're just thinking about themselves, which is fine, and maybe they will have no problems with the coronavirus," Matthews said.

"But they don't realise how much we can spread it at the same time. Like, at a bike race, if you do snot on someone in a race, or drip on a bottle and throw it into the crowd and someone in the crowd drinks out of it, and it has the coronavirus on it, then they spread it to their family. It's so rapid, this virus.

"I don't know if no races is the answer. I don't know personally what the answer is. But I think delaying the races a little bit longer, letting the virus settle down more… If it was up to me, I'd do that. But it's not up to me."

'There's more to it than riders being scared of getting sick'

Sunweb haven't had to introduce pay cuts to financially survive the pandemic, unlike some other squads, but Matthews nonetheless is, like many others, skeptical that the revised season will run in its entirety – if not due to public health, then due to the house-of-cards business model the sport operates on.

"From when we could ride outside, I personally had in my mind that there was going to be no racing this year. I didn't think it was possible," he said.

"Obviously, a lot of protocols have come in now with testing before we go to the race, and all the riders having their own rooms. I think only certain 'bubbles' of riders will go to the race together. And there's quarantine after the races, which I think it could work.

"Financially, it's going to be very difficult for a lot of races when, if you think about it, the races are obviously sponsored by money and now we basically need double the money because we need double the amount of things to make sure the riders, spectators and people at the race are safe.

"I think in the protocol now, all riders get their own room at every race, which if you think about it for organisers, who are paying for the hotels, that's double the amount of hotels, or hotel rooms, at least," he continued.

"So, there is more behind it than just riders being scared of getting sick. There is so much more behind it, and I guess with the financial crisis in the world at the moment, to now go and put on bike races when you don't know if these sponsors can put them on, let alone spend double on more security for the riders…"

Concerns and curve balls aside, Matthews is nevertheless preparing to resume racing next month in shape. He opened his season, as usual, at Paris-Nice, after which all competition was suspended, but he's kept his form during lockdown and ahead of the virtual Tour de France, which starts this weekend, and which he will take part in.

"My shape is really good," he said. "All my numbers in my training have been even better than I was before Paris-Nice. I just need to gauge it now, and make sure I can hold it until the start of the season, and start off with a bang."