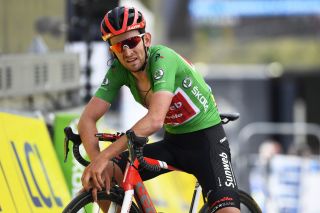 Sunweb’s Tiesj Benoot finishes the seventh and final stage of the 2020 Paris-Nice to sew up the green jersey as points winner and second place on the general classification (Image credit: Bettini Photo)

On Wednesday, Tiesj Benoot was announced among the eight riders who will represent Team Sunweb at this year's Tour de France, which has been rescheduled for August 29-September 20. On the back of his stage win and second place overall at Paris-Nice in March, it seemed reasonable to expect that Benoot would be the leader of the team, and possibly target a high finish in the GC. However, the 26-year-old has told the Belgian media that he isn't the leader of the team, and won't be targeting the overall classification.

"That's what you made of it," he told Sporza.be, "but I didn't read that anywhere in our team's announcement."

Instead, Benoot explained, the team is made up of 'freelancers', with several of them capable of trying for stage victories.

"We have no one who's going for the overall rankings," he said. "We're aiming for stage wins with several riders. Cees Bol will got for the flat stages, and in the mountains we also have several options to join a breakaway, and I'm one of them."

"In width, we have a strong and versatile team, without a classification rider," Benoot said. "Having someone going for the GC would take away a lot of opportunities for success. It is a team of freelancers: we'll attack, and try to be in breakaways as often as we can."

The Belgian took second place behind Mitchelton-Scott's Daryl Impey on stage 9 into Brioude at last year's Tour, and will look to go one better this year.

"Such transition stages should suit me best," he said, "but after Paris-Nice, I also have the confidence to go for the win on the mountain stages."

He won stage 6 and finished second overall behind Bora-Hansgrohe's Maximilian Schachmann at Paris-Nice in March, and that confidence should stand him in good stead when he looks for stage-winning opportunities.

"I have to take a closer look [at the route], but the opening days in Nice immediately look beautiful," he said.

A Classic every week

Benoot explained that a rider like him would be able to pick stages to target, and still save something for the races to come after the Tour.

"With a leader, it would be more difficult to get in a break in the mountains," he said. "This way, I can also save a bit of energy on some days, and save some strength for after the Tour, because there's going to be a Classic every week."

Benoot is set to restart his season at Strade Bianche on August 1 – a race he won back in 2018 – and hopes to hit the ground running.

"It will be a short season, but it will also be a long period without a break," he said. "Normally, you'd never race for 12 weeks at a time.

"I'm also looking forward to racing Liège-Bastogne-Liège (October 4), the Amstel Gold Race (October 10) and the Tour of Flanders (October 18), which will all now follow a Grand Tour for the first time."

While Benoot and his teammates will chase stage wins at the Tour, the team appears to have a more targeted approach for the Giro d'Italia, announcing the line-up for the Italian Grand Tour at the same time as their Tour de France squad, as well as a long list for the Vuelta a España, on Wednesday.

Michael Matthews will head to the Giro as the team's main sprinter for tougher finishes, while Wilco Kelderman and Sam Oomen will target the GC in Italy.