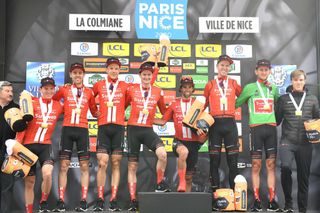 Sunweb proved to be the best team at the 2020 Paris-Nice (Image credit: Getty Images Sport)

In their first Grand Tour since the departure of Tom Dumoulin, Team Sunweb will tackle the Tour de France without general classification ambitions, as Tiesj Benoot leads the line along with a number of stage hunters and Classics hopefuls.

Wilco Kelderman and Sam Oomen, both of whom have finished in the top-ten of Grand Tour, and both of whom are leaving the team at the end of the year, will head to the Giro d'Italia.

Michael Matthews will surprisingly miss the Tour de France and the cobbled Classics in order to ride the Giro d'Italia.

Team Sunweb confirmed their eight-man line-ups for the Tour, which runs from August 29-September 20, and the Giro d'Italia (October 3-25) on Wednesday, while also issuing a long-list for the Vuelta a España (October 20-November 8).

Joining Benoot at the Tour are sprinters Cees Bol and Nikias Arndt, along with rouleurs in Søren Kragh Andersen and Jasha Sutterlin. Talented youngsters Marc Hirschi and Joris Nieuwenhuis make their Grand Tour debuts and the squad is rounded out by the experienced Nicholas Roche.

The versatile Benoot has posted strong overall results in week-long stage races but is also the team's leading Flemish Classics rider. With the team operating in 'bubbles' to minimise the risks associated with COVID-19, Andersen, Bol, Hirschi, and Sutterlin are set to go on to join him during the main Classics period in October.

"The Tour de France awaits as the first of the Grand Tours on the calendar, where we will aim for stage success through sprints and offensive racing," said head coach Rudi Kemna.

At the Giro, Sunweb will target the GC with Kelderman, who placed seventh in 2014, and Oomen, who finished ninth while supporting Dumoulin to the title in 2017.

Matthews returns to the Giro for the first time since 2015, when he wore the leader's pink jersey. He will therefore not ride the Tour or the cobbled Classics, having placed sixth on his Tour of Flanders debut last year, but will still be able to race Milan-San Remo on August 15.

The Giro group will form the basis of the squads for the Tour of Poland, Il Lombardia, and Tirreno Adriatico.

"The goal at the Giro d’Italia will be the GC and difficult sprints," stated Kemna.

Meanwhile the team's younger riders are set to be given a chance at the Vuelta, with a 12-rider long list that includes Italian sprinter Alberto Dainese and Australians Robert Power and Michael Storer. The experienced US domestique and Grand Tour time trial winner Chad Haga is on that long list, while Roche is the only rider provisionally down for two Grand Tours.

Team Sunweb's men's and women's teams will return to racing at Strade Bianche on August 1. From now until that point, they will host a training camp in the Austrian Alps, where riders can come and go, provided they stick to their bubbles and test negative for COVID-19 before travelling.