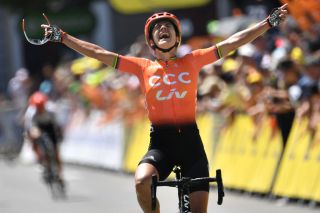 The top-tier of professional athletes and teams will arrive to Nice for the La Course by Le Tour de France on Saturday, held in conjunction with the opening stage of the men’s three-week Tour de France. Marianne Vos (CCC-Liv) will return to defend her title in the one-day race as pressure and expectations rise for organisers, ASO, to host a future multi-day women's Tour de France.

ASO along with the UCI made the decision to move the date and location of this year’s La Course by Le Tour de France as part of the revised calendar after the COVID-19 pandemic caused a mass calendar reshuffle.

Organisers originally planned a circuit race along the the Champs-Élysées in Paris on July 19 but later announced a newly designed 96km road race that will start and finish along the Promenade des Anglais in Nice on August 29.

The route design has been met with both criticism and praise with some riders, including road race world champion Annemiek van Vleuten, suggesting that the route, that includes two categorised climbs, was too short and not challenging enough to be part of the Women’s WorldTour. However, other riders have said the length and difficulty of the route is just tough enough to allow riders to ease into the re-start of the season after races were cancelled due to COVID-19 for five months, and some riders weren’t permitted to train outside during strict lockdown protocols.

Criticism over the one-day race hasn’t just revolved around this year’s route design, rather, it’s been brewing for years over ASO’s reluctance to organise a multi-day women’s Tour de France.

The first version of a women's Tour de France was held in the 1950s, but it was only one edition. ASO launched its own version of the women's Tour de France between 1984 and 1989, the height of the stage race. There have been other versions over the years, through the 1990s and the early 2000s, but it was later reduced to just four stages before it officially ended in 2009.

ASO launched the one-day La Course by Le Tour de France in 2014, after a successful petition by riders to include a women's race alongside the Tour de France. The inaugural event was a circuit race on the Champs-Élysées on the final day of the Tour de France. Early winners of the one-day race were Vos, Anna van der Breggen and Chloe Hosking in the first three editions. Organisers shifted to a two-day experiment in 2017 won by Van Vleuten. She went on to also win the one-day 2018 edition in Le Grand-Bornand. Vos won her second La Course title on a one-day circuit race in Pau last year.

Christian Prudhomme, race director of the Tour de France, told AFP in May that women's professional cycling could anticipate a Tour de France of its own as soon as 2022. However, ASO stressed that it would be 'logistically impossible' to have the men's and women's events held at the same time.

Until then, the event will remain as a one-day race on the Women’s WorldTour. This year’s race will include 23 participating teams including all eight Women's WorldTeams; Alé BTC Ljubljana, Canyon-SRAM Racing, CCC-Liv, FDJ Nouvelle-Aquitaine Futuroscope, Mitchelton-Scott, Movistar Team Women, Team Sunweb and Trek-Segafredo.

There will also be 15 Continental Teams on the start line including those inside the top 15 of the world ranking; Boels Dolmans, Parkhotel Valkenburg, Ceratizit-WNT, Valcar-Travel&Service, Equipe Paule Ka, Lotto Soudal Ladies, Cogeas Mettler Look and Hitec Products-Birk Sport.

The peloton will line up at 10 a.m. local time along the Promenade des Anglais in Nice on Saturday.

The new route will begin along the Mediterranean coast and then turn north toward the category 3 Cote de Rimiez, located just 8km into the race.

The course then heads further north toward Castagniers before looping back south to complete a 50km circuit.

The field will pass through the start-finish line in Nice and then race a second lap of the circuit and climbing over the Cote de Rimiez, for a second time, at the 56.5km mark.

The women will then race back toward Nice for what is expected to be a sprint finish Promenade des Anglais.

Marianne Vos (CCC-Liv), who won the race in 2014 and 2019, is scheduled to return to defend her title at La Course by Le Tour de France, and it is a punchy route that particularly suits her skills. She will have support from teammates Sofia Bertizzolo and Soraya Paladin, as Ashleigh Moolman-Pasio recovers from a crash that happened ahead of Strade Bianche.

Road race world champion Annemiek van Vleuten, who won the race in 2017 and 2018, is provisionally slated to lead her Mitchelton-Scott team. Although she was critical about the route not being tough enough, look for her to try an attack on one of the two climbs on course.

Chloe Hosking (Rally Cycling), who won the race in 2016, will lead a roster that includes four American riders and one Canadian. Initially, the team considered an all-Canadian support team for Hosking after the EU restricted American travel to European countries.

Liane Lippert (Sunweb) will toe the start line as the leader of the Women's WorldTour. She won the opening round at the Cadel Evans Great Ocean Road Race in February and maintained her lead through Strade Bianche and GP de Plouay. She now leads the series with 472  points. Lizzie Deignan (Trek-Segafredo) is in second with 408 points and Van Vleuten is in third with 400 points.

Tune into Cyclingnews for live coverage of La Course by Le Tour de France along with the full report, results, gallery and news following the conclusion of the race on Saturday.