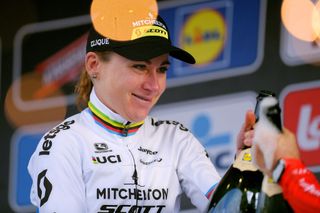 Annemiek van Vleuten (Mitchelton-Scott) was critical of the new 2020 La Course by Le Tour de France road race set to take place in Nice on August 29. The world champion said the 96km race is not challenging enough to be part of the Women's WorldTour.

"Just checked the course of this years La Course by Le Tour de France... Can't believe what I saw: a 96km 'race': only 2 laps with a 3rd cat climb... Not really WorldTour level," she wrote in a post on Twitter over the weekend.

The revised Women's WorldTour calendar will include 15 events held from August 1 to November 8. La Course was moved from its original circuit race along the Champs-Élysées in Paris on July 19 and rescheduled along with the Tour de France after the COVID-19 pandemic caused a mass calendar reshuffle.

Van Vleuten, who won La Course in 2017 and 2018, initially expressed disappointment with ASO for bringing the one-day race back to the Champs-Élysées this year, calling the previous route "nothing more than a criterium."

She clarified in a zoom press conference last week that the circuit race simply didn't suit her ability. "The course on the Champs-Élysées was more for the sprinters and, for me, not very interesting to race La Course," she said.

ASO published the route map for the new La Course route held in Nice last week. The women's field will now race a 96km road race held along two large loops. The course will start along the Mediterranean coast and head north toward the category 3 Cote de Rimiez, located just 8km into the race. The women's field will race further north toward Castagniers before looping back south to complete a 50km circuit.

The field will pass through the start-finish line in Nice before completing another large loop and a second climb over Cote de Rimiez at the 56.5km mark. The women will then race back toward Nice for what is expected to be a sprint finish Promenade des Anglais in Nice.

When asked about the new La Course route in the zoom press conference last week, Van Vleuten said she looked forward to the one-day race held on the opening day of the Tour de France. She also said the race in Nice could be interesting with a bit more climbing.

However, upon a more in-depth review of the route, she said it wasn't at the level expected to be a Women's WorldTour race.

Chloe Hosking (Rally), who won La Course in 2016, defended ASO's new one-day road race course in Nice. She felt the route was challenging enough considering the peloton hasn't raced since the beginning of March when the season was halted due to the COVID-19 coronavirus pandemic.

"Personally Annemiek I don't think it's that atrocious," Hosking wrote on Twitter. "It will only be the second World Tour race back after 6 months of no racing. For many riders their first race. The course & distance will lend itself to exciting racing, which is what the peloton & the fans need right now."

ASO has invited 23 teams to race at this edition of La Course.

Personally Annemiek I don't think it's that atrocious. It will only be the second World Tour race back after 6 months of no racing. For many riders their first race. The course & distance will lend itself to exciting racing, which is what the peloton & the fans need right now. https://t.co/6BBLW4ypf2July 18, 2020