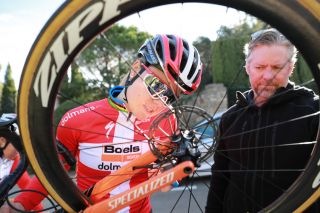 "My role consists of assisting Danny as second team [director]," Seehafer said in a team press release. "Whereby I will try to fill the gaps on the way to a new successful season as the best team in the world.

"I am particularly looking forward to seeing the riders get the best out of themselves during every race on their way to beautiful victories and the ultimate goal of Olympic success in Tokyo."

UCI confirms seven of the eight Women's WorldTeams for 2020

Seehafer has worked within the cycling industry for the past 12 years and has experience as a UCI certified team director for men's and women's professional cycling teams.

He joins Boels Dolmans after spending five years (2013-2018) as the women's endurance program manager at USA Cycling where he was responsible for junior and elite programs.

Boels Dolmans have been the number one ranked team in the world for the past five seasons that includes former world champion and Olympic road race gold medallist Anna van der Breggen.

They were denied their application to become a top-level WorldTeam in 2020 because they couldn't guarantee four-year sponsorship. The co-title sponsors are set to end financial backing of the team at the end of this year, but Stam is confident he will find replacement title sponsor for the future.

Despite remaining a second-tier Continental team, Boels Dolmans are likely to continue their dominant fashion on the world-class stage of women's bike racing. Seehafer is prepared to direct the team in their pursuit for victories.

"The biggest challenge lies in the goal of wanting to win everywhere, individually but above all as a team," Seehafer said.

"In an Olympic year we see the level around us grow even further than in a non-Olympic year. We race as a team, and as the best team in the world, this means that we race with even more pressure on our shoulders and with a greater goal. That makes winning this year even more valuable than normal."

Proudly presenting the new assistant DS for the 2020 season. Jack Seefaher will assist Danny Stam in the races of this Olympic season. Click here for an interview with the experienced American: https://t.co/mH2HanUZJg#boelsdolmans #jackseefaher pic.twitter.com/CeO9r0THBQJanuary 13, 2020