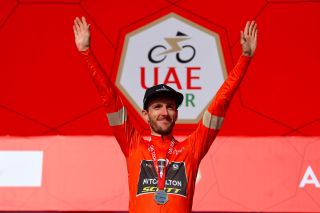 Adam Yates has signed with Team Ineos for 2021 on a two-year deal. The British climber, who finished fourth and won the white jersey at the 2016 Tour de France, leaves Mitchelton-Scott after seven years with the team.

Yates had been linked with Team Ineos for several weeks after the British team made him one of their main transfer targets for next year. Mitchelton-Scott were keen to keep the 28-year-old, and the Australian squad was able to offer greater stability after a turbulent few months, but Ineos eventually won the race for the rider's signature.

The news was confirmed 48 hours after Simon Yates announced that he would extend his contract for a further two years with Mitchelton-Scott, and will mean that the two brothers will race on rival teams for the first time since they both turned professional in 2014.

“The prospect of riding for a British team is one that I am extremely excited about. I’ve witnessed the rise of cycling in the UK during my career and I think this has been spurred on by success of British riders and this team,"  Yates said.

“It is an exciting opportunity and one that I feel has come at the right time.

“My results in week-long races and one-day races have been really solid but I would like to take that consistency to Grand Tour racing with the Ineos Grenadiers and see where it takes me.”

The signing comes weeks after it was announced that Chris Froome would leave Team Ineos and join Israel Start-Up Nation in  2021. Meanwhile,  Adam Yates is still set to race this year's Tour de France for Mitchelton-Scott, where he will target stage wins.

At the start of the year, few saw this move coming. Yates looked settled and although the last few years saw a degree of stagnation or even regression in Grand Tours, the British climber was still given leading roles in races like the Tour de France.

A move to Team Ineos gives his career a new lease of life but it also raises questions as to where the 28-year-old will fit in. In 2014, after signing with Orica-GreenEdge, Adam Yates told Cyclingweekly, "If I went to Sky then I’d end up working on the front like a slave, and I’m not a big fan of that."

Few would doubt his quality as a climber but with Pavel Sivakov, Egan Bernal and Richard Carapaz viewed as the future of the team, and Geraint Thomas kicking around for another season, Yates will not fall into a Grand Tour role with the ease he enjoyed at Mitchelton-Scott.

That aspect might take the burden of pressure off his shoulders and allow him to express himself in shorter races. At the same time, Team Ineos have shown that they will put reputation and experience aside when it comes to generating Grand Tour rosters, so if Yates takes his new opportunity with both hands he could flourish.

He will undoubtedly be aware of the cultural differences between Ineos and Mitchelton-Scott. The British team will demand greater structure, with more frequent training camps and time at altitude. This is a move that will push Yates out of his comfort zone but at 28 he’s entering what should be the prime of his career.