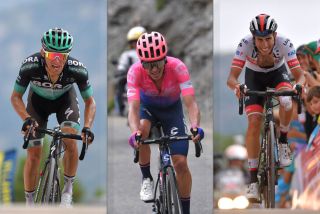 Majka, Uran, and Aru are three of the highest-profile climbers on the transfer market (Image credit: Getty Images)

After pooling together the best GC riders and the top under-25 riders out of contract at the end of the year, we’ve turned out attention to the elite climbers. With the aid of data from Fuoriclasse, we’ve selected some of the best uphill specialists.

The selection excludes the GC specialists – in this case riders who had finished inside the top-five in a Grand Tour in the last two seasons – but features those who had collected a tally of top-10 results in mountain profile races during the 2019 and 2020 seasons.

He may not have won a race since 2017, but the Pole remains an incredibly consistent performer with reliable results in Grand Tours and week-long stage races. The problem for Bora is that they have a raft of younger and more promising talent rising through the ranks and, at 30, Majka might be surplus to requirements.

The former Tinkoff rider might have his mind set on one final big paycheck but that would surely only increase his chances of leaving. A team like NTT – assuming they survive – would be crying out for a rider like Majka and the Bjarne Riis connection could be key. However, Bora would find it hard to replace a rider of Majka’s experience, especially if they have designs on competing for GC at multiple Grand Tours in a single season.

Fourth in the Tour de France in 2016, Yates has been unable to replicate that form in the intervening years but he remains a class act who can aggressively compete in stage races and across the one-day format.

He started the 2020 season with a bang, bringing UAE and Tadej Pogačar down a notch or two in the Middle East, but after eight Grand Tours there is a reasonable argument to be made that Yates isn’t the three-week racer he once promised to develop into.

Coronavirus and a landscape forever changed

There’s still plenty of time to invalidate such a notion but there’s no denying that his results over week-long and one day races are far superior. His improved time trialing has been key in his progression, and he would be a cheaper option for teams if they were interested in pinching one of the Yates brothers.

Still only 27 – despite the fact that it feels as though the Kazakh national champion has been around for years – Lutsenko has forged a career in winning week-long races no one really cares about. His body of work includes two editions of the Tour of Oman, the Tour of Almaty, the Tour of Hainan, and the Arctic Race of Norway.

His one-day record is perhaps more impressive, with a stage win in the Vuelta, plus the Coppa Sabatini and the Memorial Marco Pantani last year. The former U23 World champion (2012) had to deny rumours of working with Dr Michele Ferrari earlier this year but, assuming that Astana carry on in 2021, it’s highly unlikely that Alexandre Vinokourov will let a rider of Lutsenko’s worth leave the team.

The Frenchman can't be discounted as a GC rider, given how close he came to winning the 2019 Tour de France, but that late heartbreak mirrored the 2018 Giro d'Italia and means the 2014 Tour remains Pinot's sole Grand Tour podium.

Still, his performances last July saw him arguably at the height of his powers and as one of the very best climbers in the world, while the way he came back to win two stages of the Vuelta and Il Lombardia in 2018 suggest he can once again overcome the adversity of his 2019 Tour abandon.

In his prime, the next couple of years are huge for the Frenchman, and that's part of the reason why he won't want to seek out a new challenge away from the close relationship he has with Groupama-FDJ manager Marc Madiot. From Madiot's side, on a French team with French sponsors – one of them state-run – Pinot is far and away his prime asset. As we wrote recently, there’s more chance of Donald Trump finding a vaccine for COVID-19 than Pinot leaving FDJ.

The London-born rider has excelled in Team Ineos colours since joining the team at the start of 2017. Patience has been key, with the Axeon alumnus earning opportunities in consecutive Vueltas in 2018 and 2019. Fortitude has been required, too, with the 25-year-old battling back from a disappointing venture in last year’s Giro that was cut short by injury.

The last two seasons, in fact, have seen continued progress but the chances of another team persuading Geoghegan Hart to jump ship are slim to nil. That question might become more pertinent in another two years if he can drag himself to the same level as someone like Sivakov and Grand Tour leadership becomes realistic, but he’s not there just yet.

His Grand Tour career is virtually non-existent, with only two starts and one finish to his name, but Schachmann has nevertheless developed into one of Bora’s brightest stars. Few riders improve upon leaving Patrick Lefevere’s Deceuninck-QuickStep stable but the 26-year-old has carried on with his early career trajectory in impressive style.

It’s not just his week-long back catalogue that stands out, with his Paris-Nice win this year his latest top result, but also his consistency in the few one-day races he starts. Last year’s Ardennes results – reading fifth, fifth and third – were particularly notable. He has everything in his locker to become Germany’s first Liège-Bastogne-Liège winner since Dietrich Thurau in 1979.

The Frenchman had endured a fallow couple of years at AG2R La Mondiale and was destined to take on the Giro d’Italia before the pandemic hit Europe. Those plans have changed, with the 29-year-old once more targeting the Tour de France.

He could conceivably benefit from the new-look calendar, with a number of one-day specialists forced to give up some of their targets as they balance their teams’ Grand Tour ambitions, but this remains a pivotal time in Bardet’s career. There’s little chance of him moving to another French squad in the WorldTour but will AG2R offer him the same sort of contract they did when he last re-signed?

You know exactly what you get when you sign Ion Izagirre: a dependable rider who can crack top-10 results throughout the year and a reliable pair of hands when it comes to offering support for Grand Tour leaders in the mountains.

The younger of the Izagirre brothers certainly has at least another two-year deal in his legs but it’s just a question of whether he remains at Astana or if his agent can persuade him that there’s a better offer on the horizon.

The Belgian is both versatile and ever-improving, with a win and several top-10 performances already this season. As with several riders on this list, Teuns is more than just a climber – his ride in Andalucia has illustrated this – while his gutsy ride in both the Tour and Vuelta last year only improved the 28-year-old’s stature.

Bahrain-McLaren would be wise to offer Teuns new terms sooner rather than later.

The Colombian has done a more than admirable job in leading the American team since his arrival in 2016. He secured their highest ever Tour de France place with second on GC in 2017 and has been a loyal super domestique for others when required.

At 33, he is still performing at a high standard, with seventh in the Tour last year testament to his consistency. In terms of persona and personality, he fits naturally in EF’s culture but if he re-signs for 2021 and 2022 he could see his role shift more towards an experienced voice who passes on his knowledge to the young crop of talent – including a couple of promising Colombians – currently developing within the team.

As we’ve mentioned in previous transfer mechanics stories, AG2R find themselves in a quandary, with virtually all of the their team leaders out of contract this winter. The biggest headache comes in the form of Romain Bardet, who has faded in recent times, while Oliver Naesen also needs a new set of terms.

Latour – also free to sign with other teams in August – has been progressing steadily since turning professional in 2015 and won the white jersey in the 2018 Tour de France. Last year was disrupted by illness and a subsequent lack of form but he nevertheless remains one of France’s hopes for the future.

It’s unthinkable to imagine Aru re-signing with the team at the end of the year. The team will see his inflated wage as an excellent cost saving for 2021, while the rider will be in no doubt that the new wave of talent signed in the last two years will be given preferential treatment.

Movistar were rumoured to be in interested in the former Vuelta winner’s services before the COVID-19 outbreak and, given the relative stability of the sponsor, they might remain Aru’s most likely destination. The Italian climber will certainly be in the weaker position when it comes to negotiations, given that his results have been so poor in recent years. However, there will be teams out there who, like Movistar, see the former Astana rider as a gamble worth taking.

Other climbers out of contract