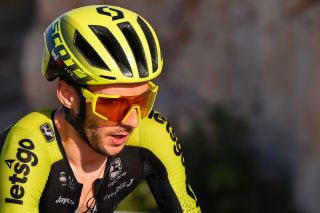 The results might not be visible just yet but considering where Adam Yates was a few short weeks ago, the British climber can be satisfied with his performance at the Critérium du Dauphiné.

Yates currently sits in 23rd position overall, and 4:46 off Primoz Roglic’s yellow jersey lead. The Mitchelton-Scott leader, who is targeting the Tour de France later this month, has lost time on each of the three stages in the race so far but there is a reason: The Mitchelton-Scott rider spent ten days off the bike due to what his team described as ‘persistent gastroenteritis’. As a consequence, the 28-year-old is riding cautiously through the Dauphiné mountains as he slowly rebuilds his form.

"I think that I’m getting better every day," Yates said after stage 3 to Saint-Martin-de-Belleville.

"I’ve not had the most ideal preparation and was sick but I’m getting better everyday and I’m doing what I can without going into the red and really hurting myself. All things considered I’m moving in the right direction and I’m looking forward to the next two days."

The final two days at the Dauphine continue the trend of mountain finishes in this year’s race. Every single stage in the five-day event has ended with an uphill battle and seen Jumbo-Visma assume control of the race with two stages wins and the race lead. Yates has observed the racing as he doses his efforts.

"A lot of guys are going well, especially a couple of the teams that are well organized and have obviously done a lot of training over lockdown and the quarantine period," Yates pointed out.

Yates started the year in near-perfect form, winning a stage and the GC at the UAE Tour in late February before the COVID1-9 pandemic and lockdowns across the world put an end to professional cycling.

The Dauphine is the first and only major WorldTour stage race with genuine mountain stages ahead of the Tour and Yates has been impressed with how his rivals have raised their game. However, the former white jersey winner at the Tour de France remains confident that he can arrive in Nice for the Grand Départ in full health. The Tour de France starts on August 29.

"They’ve come out really strong and you can tell that the level is really high at the moment but as a team we’ve also prepared really well.  We’ve just got get it together, start nailing it and it will come together."