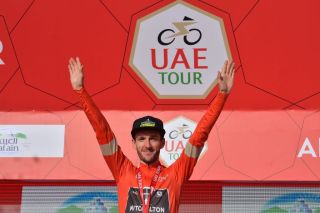 Adam Yates could be on the verge of joining Team Ineos for 2021 after the British climber was offered a multiple-year deal to join forces with Egan Bernal and Geraint Thomas for next season.

Yates, 27, and his twin brother Simon are both out of contract at the end of the year, and Mitchelton-Scott are desperate to keep both riders. But with uncertainty over the team's long-term future beyond 2022 and space at Team Ineos with the departure of Chris Froome to Israel Start-Up Nation already announced, Adam Yates is said to be weighing up his options.

Several teams have expressed interest in Yates this season, while Trek-Segafredo briefly held interest in Simon Yates. That interest has cooled, however, with the Italian team telling Cyclingnews that they will not pursue the British climber, even with Richie Porte set to join Ineos.

It looks increasingly likely that Simon will re-sign with the Australian WorldTour team after their owner Gerry Ryan announced that he would fund the team until at least 2022 as they look to secure financial support from a new sponsor. However, according to several sources, Adam Yates has given Ineos' offer considerable thought.

The British team might be stacked with Grand Tour leaders, but they offer greater long-term stability, while one source close to the talks told Cyclingnews that Ineos' deep pockets was also a factor.

Impey with a decision to make as Chris Froome comes calling

The potential downside to the move would come in the form of responsibilities. At Mitchelton-Scott, Yates would have far greater freedom and opportunities when it came to his objectives, especially around Grand Tours. At Ineos he would have to compete with Thomas, Bernal, Richard Carapaz and younger riders like Pavel Sivakov for leadership roles.

Yates has been with Mitchelton-Scott, then Orica-GreenEdge, since 2014, when he turned pro with his brother. He has gone on to win several high profile races, including the Clasica San Sebastian. He finished fourth at the 2016 Tour de France and won the white jersey, but his Grand Tour record since then has failed to live up to that promise.

He is set to ride the Tour de France later this year, and won the UAE Tour earlier this year.

Mitchelton-Scott, at present, appear to be in a holding pattern when it comes to transfers. With Ryan only able to offer short-term deals and no increase in budget, the team need to balance their incomings with riders leaving.

Daryl Impey is one such rider, with the South African still deciding over whether to sign a deal at Mitchelton-Scott or join Chris Froome at Israel Start-Up Nation.

Cyclingnews contacted Team Ineos in relation to Adam Yates. They responded: "We don't comment on speculation or rider contracts."

Mitchelton in advanced discussions with Bianchi

It's not just riders that are moving, with Bianchi said to be in deep negotiations to replace Scott as the team's bike supplier.

Scott have been with team for eight years, but they have been hit by the financial crisis stemming from the COVID-19 pandemic. And with Jumbo-Visma turning to Cervélo bikes for 2021, Bianchi are without a WorldTour ride. That has led to discussions with Mitchelton, which have reached a very advanced stage.