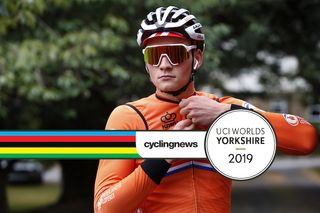 In Mathieu van der Poel, the Netherlands have one of the overwhelming favourites to take the rainbow jersey in Harrogate, Yorkshire, at the World Championships elite men's road race on Sunday.

Mathieu van der Poel: I'm among the few guys that can definitely win the World Championships

Ahead of the race, Cyclingnews sat down for an exclusive chat with Dutch national team manager Koos Moerenhout to hear how they hope to get 'MVDP' on the top step of the podium on Sunday evening.

Cyclingnews: When did you decide Van der Poel should lead the Netherlands in Yorkshire?

Koos Moerenhout: First of all, Mathieu has always been a very talented rider, from day one, but this year the spring Classics were a goal for him. You could have had logical doubts about whether he could finish off a big Classic with a lot of kilometres, or a race like the Worlds, but he proved he could do that. He won Amstel Gold in such a fantastic way. That, for me, was the reason to appoint him.

CN: How did you convince him to skip the mountain bike Worlds for this?

KM: In February, I did a recon here to get a good view of the course, and it's an ideal parcours for him. I told him, 'You don't run into a parcours like this every year.' It's tough, but it's not climbing climbing. A good, strong rider has many opportunities here to steer it in the right direction and Mathieu can do that, either by attacking or in a sprint from a small group.

CN: Did he take much convincing?

KM: It wasn't hard to convince him, no. I showed him my confidence in him and quite soon he made his decision. The way he rode in April gave him a boost, which, added to the parcours, was the decisive argument.

CN: Many people are saying you have the number-one favourite – what do you make of that?

KM: He's one of the main favourites, and he doesn't run away from that responsibility, and neither do we. On the other hand, all the other possible favourites have shown in the past weeks that they're in good shape, too. For us, it's good to have him on board because he can finish off a race, and that's not that easy to find. It's never easy. It might look easy but it never is, and it's also never a guarantee, and we're all quite realistic about that, because there are so many ways you can lose the race.

CN: Mathieu is still new to road racing and is a debutant at the elite road Worlds. Does he have the necessary experience?

KM: In that area, we also have to see. It is his first Worlds with the elites, and he's directly in a leadership role. One thing's for sure, he knows what he wants, he has a strong mind, and he doesn't take things for granted, like riders sacrificing themselves for him. They're already good components of being a leader.

CN: How is he handling all the expectation so far?

KM: He's easygoing. He doesn't seem to be impressed – put it that way. He's very relaxed about it. He's a killer – he wants to win and will be pissed if he doesn't, but he's realistic enough to know it's not the end of the world if it doesn't happen. We cannot forget he's still a young guy, and that he's new to this level in cycling.

Although he might be, according to some, the favourite, in that sense I would also like to take a bit of the pressure off his back. You don't need to run away from pressure, but it's like the stock exchange – results from the past are never a guarantee of success now. The best way to let Mathieu perform is to let him have fun that day, and he will be good.

CN: Tactically, what's the approach that will get the best out of him?

KM: The nice thing about Mathieu is that we can lay out every tactic here, but he's capable of reading and feeling the race – when it's right to go or not to go. That makes him unpredictable. Then it's good to have Mathieu around. What makes this circuit special is it gives you plenty of opportunity to open up the race and make it a race. It's going to be very hard to control this race. I like to keep our options open, and that's also the type of rider he is. He's unpredictable, and we need to make the most of that.

CN: What kind of race are you expecting?

KM: The length of the race means that it's basically impossible to race from 'kilometre 0'. If you look back at the history of the Worlds road race, it's always a waiting game. Here, it's never long climbing, but it is constantly up and down, and it will add up. For sure the finishing circuits will be brutal. There won't be a big bunch at the finish. To become world champion, everything needs to be perfect that day, every piece needs to fall into place.

Everyone's talking about Mathieu, but I'm interested in team dynamics, and Mathieu does need a team. That, for me, is maybe the biggest thing. His presence might even give other riders opportunities – if everyone is going to watch Mathieu, then anything can happen for other riders as well. That's maybe also a warning for other countries.