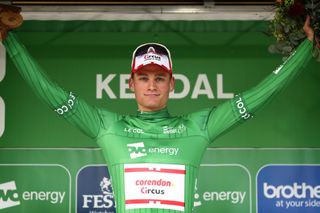 Not for the first time in his young career, Mathieu van der Poel (Corendon-Circus) left a world-class field in his wake. This time it was on stage 4 of the Tour of Britain and, with the UCI Road World Championships just around the corner, the 24-year-old has once again shown he is a genuine contender for the rainbow jersey.

Van der Poel made his winning move with a little over 300 metres to go - a blistering attack that left his rivals for dead. One rider, a Tour de France stage winner no less, quipped after the finish that the Dutchman had made the opposition look like juniors, such was the speed and ferocity with which he dropped everyone on the short climb to the line in Kendal.

The winning margin might have been just three seconds, but it was the manner of victory that left everyone speechless.

"It was a bit of a gamble because I didn’t really know where the finish line was," van der Poel said as he warmed down on the rollers.

"I was boxed in yesterday at the finish and I didn’t want that to happen again today, so with 300m to go, I went full gas. Usually, that’s a bit far but I immediately had a gap, and with 100m to go the road was a bit easier, so the gap was big enough to last until the finish line."

The Corendon-Circus rider has raced fewer than 30 days on the road this year but his 2019 palmares is something to behold and flies in the face of all logic when it comes to typical race programmes and paths to success.

He wins at an average of once every three days of racing, with a season roll of honour that includes the Grand Prix de Denain, Dwars door Vlaanderen, De Brabantse Pijl, Amstel Gold Race, a stage at the Arctic Race of Norway, and Tuesday’s triumph at the Tour of Britain. None of that takes into consideration his strike rate in cyclo-cross and mountain biking.

"It’s nice to win a stage. It was a really hard stage with a lot of climbing," Van der Poel said.

"I think that my team did it perfectly. We controlled the race with the team of Matteo Trentin [Mitchelton-Scott -ed] and then at the end, we did an amazing job to get the leaders back for me to do my sprint."

Corendon-Circus were indeed on the front of the peloton for much of the stage and nullified several attacks from Team Ineos. They then reeled in a late three-man move that contained a dogged James Shaw before Van der Poel showed a clean pair of heels, with Jasper de Buyst (Lotto Soudal) and Simon Clarke finishing second and third, respectively.

"That wasn’t really the plan but because the break was so strong we needed to control it with Mitchelton-Scott," Van der Poel said. "I felt pretty okay and I knew that the finish was one that suited me if I had good legs. I was confident of doing a good finish."

As a result of his stage win, Van der Poel now leads the Tour of Britain after four stages, with Trentin ousted from the green jersey and bumped down to second overall by a single second.

"It’s going to be a battle for sure," said Van der Poel, highlighting the 14.4km individual time trial on stage 6 on Thursday.

"I think that the time trial will be decisive and it’s been a long, long time since I’ve done one. I don’t know where I stand on that discipline at the moment. It’s going to be really hard to be in touch with the best time trial guys."

Given his condition, few would bet against Van der Poel pulling out another impressive ride in the time trial, too.