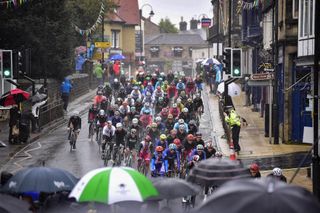 The UCI have made the decision to shorten Sunday's World Championships elite men's road-race route in Yorkshire by 23.5km to 261km due to forecast severe weather conditions. Two additional laps of the finishing circuit in Harrogate have also been added to the course, and the race will now start 20 minutes later than originally planned, at 9am UK time.

Cycling's governing body announced the shortening of the original 284.5km race on Sunday morning. It will now bypass the most northern loop of the route, cutting out the climbs of Buttertubs and Grinton Moor in the Yorkshire Dales.

The revised route will head east after 76.9km on the original race route, which starts in Leeds, and then head through Swinithwaite, West Witton and Wensley before picking up the original route at Leyburn and continuing south-east through Ripon and on to Harrogate.

Once there, the riders were originally going to complete seven of the finishing circuits, but will now ride nine laps.

"Due to severe weather conditions, the Men Elite RR has been shortened to 261km and will start at 9am BST," read a tweet from the UCI's account on Sunday morning, with the race start time changing from 8.40am BST.

"The race will now travel east near Aysgarth and rejoin the original race route at Leyburn," it continued. "Riders will complete 9 laps of the Harrogate Circuit."

A subsequent press release by the UCI added: "Due to heavy rain that continues to fall across the northern section of the Elite Men’s Road Race route, Yorkshire 2019 and the UCI have taken the decision to divert the route at Bishopdale Beck just outside Aysgarth, and to direct riders east up Temple Bank and along the A684 to Leyburn where the race will continue as normal.

"The decision was made after extensive consultation with the UCI, our multi-agency partners, the environment agency and local mountain rescue teams," it read. "We consider the safety of spectators and riders as paramount and want everyone to enjoy the racing, but the conditions in the Dales puts that at risk.

"This means, regrettably, that the race will not now pass through Bainbridge, Hawes, Buttertubs, Muker, Gunnerside, Reeth, and Grinton Moor. We know this will be hugely disappointing to the communities in these locations who have been planning events and celebrations to coincide with the race today. We are very sorry."

At 261km, the race will nevertheless remain one of attrition, and, although it gains two more laps of the tough, 14km finishing circuit, it could see a bigger group contest the finale than originally foreseen.

Due to severe weather conditions, the Men Elite RR has been shortened to 261km and will start at 9am BST. The race will now travel east near Aysgarth and rejoin the original race route at Leyburn. Riders will complete 9 laps of the Harrogate Circuit. #Yorkshire2019September 29, 2019