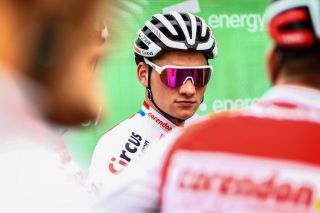 The Dutch cycling federation (KNWU) has announced its elite men's squads for the road race and individual time trial at the UCI Road World Championships to be held in Yorkshire, in the UK, from September 21-29, with Mathieu van der Poel and Bauke Mollema leading the way in the road race.

Van der Poel admitted at an event held by his Corendon-Circus trade team last week that he is one of the big favourites for the Classics-style, 284.5km road race from Leeds to Harrogate on September 29, while Mollema will also be expected to be in the mix.

Trek-Segafredo tick off Giro d'Italia goals through Mollema and Ciccone

"We have been able to put together a nice team for the time trial and the road race, with which we go on the hunt for medals," said national team manager Koos Moerenhout on the federation's website.

"I have full confidence in the individual and team qualities of this strong batch of riders," he said.

Van der Poel said last week that his performances at this year's spring Classics – when he won Amstel Gold, Dwars door Vlaanderen, the GP de Denain and the Brabantse Pijl – definitely put him among the favourites.

"The World Championships in Yorkshire are tailor-made for me, and that doesn't happen every year," he said. "Sometimes a road Worlds is completely flat or, like next year [in Switzerland], really for the climbers. I just have to take my chance now."

The Dutch team has qualified eight riders for the road race, and Van der Poel and Mollema (Trek-Segafredo) will have strong support in former Paris-Roubaix and Tour of Flanders champion Niki Terpstra and the winner of the opening stage of this year's Tour de France, Mike Teunissen. The squad is completed by Pieter Weening (Roompot-Charles), Sebastian Langeveld (EF Education First), Jos van Emden (Jumbo-Visma) and Dylan van Baarle (Team Ineos), with the latter two riders also competing in the individual time trial on September 25.

Mollema and Van Emden will also compete in the mixed relay on September 22. The new competition this year replaces the men's and women's team time trials at the Worlds, and sees three men and three women from the same nation ride separate team time trials, with a relay-style handover, before the two times are added together to decide a national-team winner.