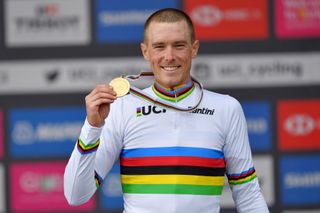 When it comes to the subject of Rohan Dennis' next team, every day brings a new rumour. On Tuesday the Italian press linked Movistar with a move for the Australian, while two days previously Sunweb was the apparent future home of the time trial world champion.

Both rumours have, for now, been quashed, but it doesn’t take a genius to realize that several teams have been contacted with an offer of taking the free agent for 2020. That said, there are teams better suited to Dennis, or least more willing to listen, than others.

After his contract was terminated by Bahrain-Merida, Cyclingnews takes a look at several teams – some of which have already been in talks over signing Dennis – as we ponder where the Australian could end up.

Although negotiations between Dennis' representatives and Team CCC stalled over a possible mid-season move, the Polish squad still represents one of Dennis' most viable options for 2020.

A move to the team would see him link up with several staff and management from his BMC Racing days and would offer a home in which the squad at least had experience in managing volatile situations.

Time trial coach Marco Pinotti needs a true time trial specialist to work with and Dennis would be able to focus on his Olympic dreams while GC pressures remain with Ilnur Zakarin. In July, team boss, Jim Ochowicz admitted that he would have 'no problem working with him' in the future.

At the time Ochowicz added: "We never lost interest in Rohan. He left before we got this project off the ground. We parted on good terms, and if any of the riders who left had an interest in coming back, I'd talk to them. I'd be open to working with any of the riders who left the team. It's not just one guy. I'm not zeroing in on anyone. I would have no problem working with him."

On Tuesday, Ochowicz told Cyclingnews that there had been no commitments made since July. He and Dennis spoke very briefly at the start of the road race at the World Championships, and CCC Team have one possible spot to fill in their 30-rider roster for next season.

However, Ochowicz added that he spoke to Dennis' agent since the news of the rider's release was made but a move to Ochowicz's team would likely involve a request for additional funds from sponsors.

"As I said at the Tour I can work with Rohan. When he's racing well he's the best time trialist in the world. I don't have a problem with him but I know him a bit better than others," Ochowicz said on Tuesday.

"Let's just say our budget is spent, so any new riders would see us going back to our sponsors for support."

Other than the national attachment there’s little to suggest that a move to Mitchelton-Scott might happen. Dennis' camp didn’t even contact the team in August, which says everything you need to know.

As for the team, they've never gone after Australian talent just for the sake of it, while their focus is still on GC racing and supporting the Yates brothers in Grand Tours. They have a competitive time trial bike, which would suit Dennis, but that’s probably as far as it goes.

Trek Segafredo confirmed to Cyclingnews during the World Championships that Dennis' agent had been in touch over a possible mid-season move. However, the American team was put off by what they described as a 'difficult situation'.

They have a competitive time trial bike and, in theory, space for Dennis, but they’ve also spent the majority of their budget on Vincenzo Nibali and a raft of up and coming talents. They have one spot available for Dennis but at this point it’s likely to go to Italian rider Gianluca Brambilla who is set to re-sign at this point in time.

On paper, this would possibly be Dennis' ideal pick. Ineos pride themselves on having the best equipment, science, budget and backroom staff, and for a rider like Dennis – who clearly demands perfection of those around him – this partnership could work.

There have been rumours of this move circulating for some time with Dave Brailsford apparently keen on making Dennis his latest project. The Ineos management would an affinity with Dennis' track background, and if he were able to focus on the Olympics in 2020, then the squad, and Dennis, would have the option of turning their attention towards Grand Tour progression further down the line.

Dennis would also likely thrive from the regime and the attention to detail that Ineos constantly broadcast. In return, Ineos would have themselves a perfect rider to race on the front of a peloton and a specialist who can pick off time trial wins as and when he chooses. The question they have to ask themselves is whether he's worth the risk after they've invested so much capital in younger riders.

The only link here would be Allan Peiper, who has returned to management after his time away. Dennis and Peiper go way back to when the rider was coming through the ranks as a hot prospect, and although they’ve had some ups and downs they've always come back to one another, as Dennis put it in his post-race press conference at the World Championships.

Peiper would probably be the best man-manager on this list but the question is whether the rest of the backroom staff are up to the level Dennis requires. His agent will be well aware of the time he sent Ben Swift to the squad, for instance.

That said, the team made significant improvements last year but they've still got room for improvement. There’s also, once again, the question over equipment.

Cycling Australia created the perfect bubble for Dennis at this year's World Championships. They gave him the programme, the equipment and, most importantly, the space and time he needed to refocus after an emotionally difficult period within his professional career.

Therefore, if a team is not found, Dennis could always find solace and support in sticking under the federation's wing for 2020. It might be an unorthodox path but Dennis would have a perfect block of racing during January and February, with no pressure on his shoulders to chase points in events such as the Tour Down Under.

Bradley McGee could then cherry-pick a handful of stage races in which Dennis could hone his form before arriving in Tokyo to race for a gold medal. The federation would offer financial support, while his agent could conceivably attract sponsors to help draw in further revenue.

Dennis’ agent has managed similar situations, such as Wiggins’ Hour Record. In fact, expect a book deal no matter where Dennis lands up.

A popular choice according to Twitter due to the fact that Dimension Data ride BMC bikes. Unfortunately, that’s not how it works.

For instance, you wouldn't move homes because one potential residency had a swanky fridge you liked, would you? They’ve already signed one time trial specialist in Victor Campenaerts and frankly, Dennis and Dimension Data wouldn’t work at all.

If the team can’t even keep their management on the same page when it comes to Tour de France team selection then what hope with a rider who isn't shy in coming forward? They confirmed during the Worlds that there had been no contact between the team and the rider's representatives. That was before Bahrain-Merida terminated his contract, however.