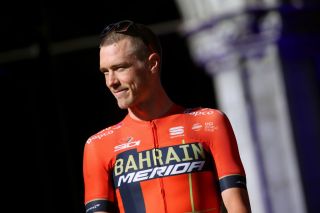 Rohan Dennis has left Bahrain-Merida with immediate effect after his contract was terminated by the team.

Cyclingnews learned of the news this morning, with the team responding directly with a statement that was later published this afternoon. The team confirmed that Dennis' two-year deal had been terminated on September 13.

"The team terminated its contract with Mr Dennis on 13th September 2019. This termination was not made public to allow Mr Dennis an undisputed preparation for the UCI 2019 Road World Championships Individual time trial race," the statement read.

"Mr Dennis has notified the UCI Arbitral Board.  No further comment will be made at this time."

Dennis fell foul of the team during the Tour de France when he walked out of the race on the eve of the individual time trial. The decision to quit the Tour in such circumstances created a huge amount of negative press for the Bahrain-Merida team, with several equipment sponsors disappointed with the Australian’s decision.

Rohan Dennis: Tour de France pull-out has been 'blown out of proportion'

It is understood that Dennis was particularly unhappy with clothing supplied to him ahead of the time trial.

Dennis spent the next 10 weeks training in virtual solitude but he gave an interview to a hometown publication in Australia in which he expressed his belief that he would stay with the squad in 2020 for the second year of his contract.

He retained his time trial world title earlier this week but did so on a blacked-out BMC bike instead of his trade-team-issue Merida. This in itself broke no rules, as riders can race on equipment supplied by national federations, but Merida and Bahrain-Merida were silent when Dennis retained his title.

Dennis has not raced for the team since quitting the Tour and confirmed this week that he had no plans to race again for the squad this season. On Sunday, he took part in the men’s road race at the World Championships while riding a BMC road bike.

It is understood that, in August, Dennis’ agent attempted to find his rider another team. Trek-Segafredo have confirmed that they were approached but declined to take the rider as the situation between Dennis and Bahrain-Merida had yet to be resolved. There then appeared to be a period in which Dennis considered patching up his differences with Bahrain-Merida after one financial offer from CCC Team was deemed too low.

The news of his contract termination puts Dennis back on the market.  It’s understood that CCC Team are still among the teams favoured to sign him. Team Ineos have also been linked with the Australian.