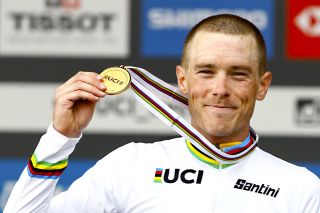 Before punching the air with such force he could easily have lost control of his bike, Rohan Dennis pointed to his head. A ‘mental game’ was how he described the World Championship time trial, referring not just to the hour he spent in the saddle, but the two months that had gone before.

“I pulled out of the Tour de France,” Dennis said in the winner’s post-race press conference in Harrogate, squarely addressing the elephant in the room.

Even if we’re no closer to knowing what brought the Australian to suddenly climb off his bike on the edge of the Pyrenees, he opened up about the ‘negative thoughts’ that swirled in the aftermath and the process that led him to deliver what he described as the biggest victory of his career.

“There was a lot of backlash from that. I took a lot of it on board and that wasn’t healthy for me,” he said of his exit from the Tour. “When I was riding and seeing things negatively, it was affecting my training. I was thinking I wasn’t good enough.”

With the help of a sports psychologist, David Spindler, Dennis decided he needed to block out the negativity and, to a degree, the outside world, deleting his Twitter account.

“There’s been a lot of work done off the bike, mentally, to get me prepared to just line up here, let alone win,” Dennis said.

“The celebration was a reminder that it wasn’t just my body. My body was always good. It was a bit of a thank you as well for what David Spindler has done for me. It’s too hard to explain, to be honest but, in very basic terms, it’s been a lot of support, getting me to believe in myself, be more confident, and not be so negative in my head, and to be more positive about the good things that are going on in my life.

“Physically, I’ve had it all year. It was about getting the mental side back into that flow of not caring too much about anything apart from what I’m doing. It was about removing that negativity and really thinking about the people who support me no matter what.”

Those people include his wife and his infant son, who were the first people he celebrated with in Harrogate. They were also the last people he saw before he left Australian team’s hotel for the start of the race in Northallerton. En route, he posted a photo of him and his son to Instagram, along with the caption ‘what really matters’.

“That put everything into perspective. When I saw that picture, I was like, ‘you know what, it’s just a bike race’,” Dennis said.

“Whatever happens happens. My son isn’t going anywhere, and neither is my wife. No matter the result, they’re going to support me. Obviously it’s nice to win but, when I’m 65, it’s not going to be in the top 10 things I’m proud of in my life. The thing that matters is my family.”

The visit from his family saw him click into the mindset that took him to the world title, but the belief that it was possible dates a little further back.

“To be exact, it was the 15th of September,” Dennis revealed, referring to a training session that had gone particularly well. “We mimicked last year’s preparation session and we bettered it, comfortably. That’s when my confidence really came back. From then on, I had no doubt I’d be on the podium here, and saw no reason I couldn’t win.”

Dennis had banished his demons by the time he stood, beaming, on the podium in Harrogate, but the fall-out from his Tour de France exit does not stop here.

The strained nature of his relationship with his Bahrain-Merida team was in fact broadcast globally throughout his time trial, which he rode on a blacked-out BMC Timemachine rather than his trade-team-issue Merida Warp.

While BMC posted a photo of Dennis on the bike to their Instragram account, Bahrain-Merida, at the time of writing, have made no public reference to the fact one of their riders has just won a world title. The silence, as they say, is deafening.

Asked about his equipment choices in the press conference, Dennis was guarded. “I think we covered this the other day,” he said, referring to a small pre-race media gathering on Monday. “The bike was supplied by Cycling Australia and they deemed it to be the quickest bike for me and my body shape. I can’t speak for Bahrain-Merida and how they’re feeling – only for my result, and I’m happy.”

Asked if he was riding with a point to prove, he said: “Not to anybody but myself.” Revenge? “No. This is for me – nobody else. Just me and the small team backing me into these Worlds. There’s no revenge. This is all in a happy way. There’s no ill will with me winning this time trial. It’s all happiness for my family and the group behind me.”

Dennis will line up in Australia colours again on Sunday for the elite men’s road race, where he’ll be supporting Michael Matthews, but is not set to race again for Bahrain-Merida in 2019.

“I guess you’d have to ask everyone else that one. At the moment the only race I’ve got left is Sunday. At that point I’ll be hanging up my bike for the off-season and re-setting for 2020 and working towards that goal of the Olympics in Tokyo,” Dennis said.

Whether we’ll see him in a Bahrain jersey in 2020, which is the second and final year of his contract, he simply said: “At the moment I cannot confirm anything.”

For now, Dennis was simply happy, after weeks of shutting himself off, to have come out and issued a statement, if only of intent.

“I’m confident that, well, basically, I’m here to stay,” said the 29-year-old. “I’m here to continue to win, to push to be the best in the world – not just for the next 12 months but for the future as well.

“I know I will be here for a lot longer. I’m not going anywhere.”