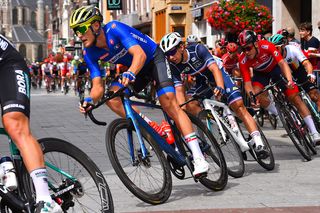 In 1999, Matteo Trentin made his first appearance at a World Championships when, at the age of nine, he ventured to Verona, Italy, to watch Spain's Oscar Freire win the rainbow jersey. Twenty years later and Trentin returns to the World Championships as the leader of an ever-improving Italian team. But can the Mitchelton-Scott rider end his nation's 11-year drought for a medal?

Trentin: Van der Poel made us look like juniors

Oscar Freire: The rise of a legend at the 1999 World Championships - Podcast

The final eight-rider Italian national team has yet to be confirmed but, barring any major shocks, Trentin is expected to lead the line with Davide Cimolai, Salvatore Puccio, Davide Ballerini, Sonny Colbrelli and Dario Cataldo all penciled in as the 30-year-old's supporting cast. The final two spots on the Italian roster have yet to be decided by Davide Cassani, the national coach, who was waiting on the results from the Canadian WorldTour races at the weekend before deciding on whether to hand further places to Vincenzo Nibali and Tour of Flanders winner Alberto Bettiol.

Last week, Trentin honed his form at the Tour of Britain, where he was locked in an intriguing battle for the GC with young Dutch hope Mathieu van der Poel. For both riders, the British stage race was just a stepping stone towards Yorkshire, and coincidently the Dutch have struggled at the Worlds for even longer than the Italians, with their last medallist coming in the form of Leon Van Bon in San Sebastian back in 1997.

"I'm here to prepare and to have the best shape possible for in two weeks' time. I'm at a good point right now but there's still some time," a relaxed Trentin told Cyclingnews during the Tour of Britain, where he won stage 2.

He's in arguably the most consistent form he's enjoyed since 2017, when he ended a fine summer and autumn with four stage wins at the Vuelta, victory at Paris-Tours and fourth at the Worlds in Norway. Since winning a Tour de France stage in Gap this summer, Trentin has taken top ten results in several one-day races before notching up his Tour of Britain stage win. His condition is certainly on the up, and although he will start in Yorkshire slightly below some of the blockbuster favourites, Trentin's aspirations should be taken seriously.

"I'm having a different preparation, but I think that's fine because it suits what we'll see in Yorkshire in a few weeks from now because it's more or less the same environment," he said of his decision to use the Tour of Britain as his final warm-up race.

The fact that Italy has already pinned their hopes to Trentin's mast has been welcomed by not just athletes vying for places on the team but also the national media, which meticulously follows riders in the lead-up to the Worlds. There is clarity and common sense to Cassani's plan, and the days of Italy's stance of filling their squad with household names and then worrying about the small matter of tactics are now long gone.

And while Italy may not have hit the high notes at the Worlds in the last few years, a quiet revolution has taken place, with wins in the previous two editions of the European Championship road race, courtesy of Trentin and Elia Viviani. The breakthroughs for Bettiol at the Tour of Flanders and, to a lesser extent, riders like Edoardo Affini further illustrate the progress made by the national team.

After all, Trentin was but a junior when Italy won three consecutive rainbow jerseys between 2006 and 2008, kicking up dirt on his cyclo-cross bike before turning his attention to the road. His first memories, however, were of Freire taking a shock win in Verona back in 1999. That day, Trentin was in the crowd, having travelled with his father and brother to watch a few days of the Worlds.

"I remember Zolder when Mario Cipollini won. It was like a coronation, but I was also in Verona in 1999 when Cunego won the junior race. I think that Filippo Pozzato was fourth," Trentin remembered, correctly.

"The town I grew up in was less than two hours away, so I went down to Verona with my father and my brother. We just watched the race, and I remember we only saw the juniors because it was less crowded. I was so young that I didn't really understand it was the juniors racing," he said.

Twenty years later and Trentin will lead his nation into a World Championships, but he states that there is no pressure in assuming the role of leadership; instead, it's a sense of pride and honour. Despite a lull in Italian cycling after years of introspection and soul-searching the classic azzurra jersey remains a highlight for any Italian rider.

"It gives me more morale and it makes me want to ride as well as I can," explained Trentin.

The course in Yorkshire certainly suits a rider of Trentin's ability. Punchy climbs, technical sections and a terrain that will ensure that riders can't switch off for even a second should ensure that, bar bad luck, the Monaco-based rider remains in contention towards the pointy end of proceedings.

"For sure, it's the Worlds and it's going to be hard, but I've checked out the course. We went after Amstel Gold, and we saw the circuit and we saw the last 70km of the big loop. It's pretty hard, and I think that the weather is going to play an important role. If it's raining and shitty then it won't be an affair for a lot of guys.

"It's kind of special, the course, because normally you have a big loop before, which is relaxing, and there's nothing to really say about it, but this time it's going to be stressful from the start. That's going to make it different because we'll have the first 180km, but it won't be, like, big, wide roads. It will be small roads, left and right, and it won't be relaxing at all.

"We've won the European championships for the last two seasons, and we even had the silver the year before," continued Trentin.

"We're winning a lot of races, and we won a Monument again this year, for the first time since Nibali's win last year [at Milan-San Remo], when Bettiol won Flanders, so I think we're up there in a sport that is more international than ever, with riders coming from everywhere. I think that Italy's in a good place."

It certainly feels as though the momentum is with Trentin and Italy right now. They look like a cohesive unit, and one that could surprise some of the greater favourites in Yorkshire. Such a feat took place 20 years ago, as Trentin will well remember.