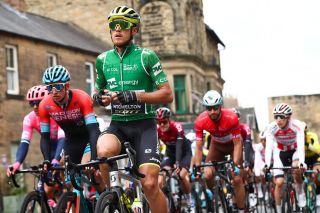 Matteo Trentin (Mitchelton Scott) finished inside the top-10 on stage 4 of the Tour of Britain, but it wasn't enough for the Italian to hold onto his leader's jersey with Mathieu Van der Poel (Corendon-Circus) usurping him after taking the stage win in Kendal.

Trentin and his team worked tirelessly to control a difficult day in the saddle. They protected the Italian's lead after Team Ineos and several other squads launched attacks during a critical GC stage, and the former European road champion was in contention as the finale approached.

Trentin himself covered several late moves, but he, like everyone else in the race, was powerless to stop Van der Poel as the 24-year-old took off at the bottom of the final climb with around 300m to go. Jasper de Buyst (Lotto Soudal) and Simon Clarke (EF Education First) rounded out the top three, with Trentin finishing at the same time at three seconds.

"Tomorrow we'll leave it to the sprinters' teams. It's probably going to be a sprint if they bring the break back," Trentin told Cyclingnews as he rode back to the team bus.

"I think that the time trial [stage 5 – ed.] is going to decide the race because I'm just one or two seconds behind him."

Trentin, like Mathieu Van der Poel, will lead his nation at the World Championships later this month in Yorkshire, and Trentin, who finished fourth in 2017, believes that the Dutchman has the credentials and the form to be counted as one of the leading contenders.

"He can be one of the favourites for the Worlds. He won Amstel Gold," he said. "It's been three or four days since he won a race so he was probably angry. Or not used to it.

"For sure he's one of the favourites but lets see how it plays out. On a finish like this there are few riders who can match him, probably no one at he moment. He just left us there like a bunch of juniors. We'll see."