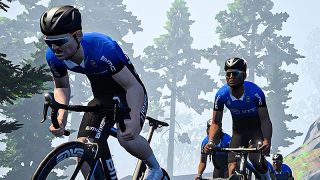 In terms of popularity and an active-user base, indoor cycling is seeing its stock rise exponentially at the moment as the cycling world adheres to social-distancing measures in a bid to slow the spread of the COVID-19 pandemic.

Team Ineos isn't the only pro team to take to the popular indoor cycling app, though. The best turbo trainers are clearly now fit for the strongest cyclists in the world, as riders from across the peloton – both men's and women’s – are taking to the platform to keep up with their prescribed training plans.

But who's 'winning' the Zwift race when it comes to kilometres covered? Let's take a look.

Representing all the women is Canyon-SRAM's German domestique, Tanja Erath. She's put in a solid nine days and six hours' worth of time aboard her turbo trainer, during which she covered 7,068km, which equates to the distance of two Tours de France.

The 30-year-old has climbed an incredible 51,256 metres during her time on Zwift, which is almost six times up Mt Everest, or 474 times up Erath's local climb, the Col De Niederhofen, on which she holds the Strava QOM.

Canyon-SRAM are sponsored by Tacx, so Erath's time in Watopia has been spent aboard the Neo 2T and the team's lightweight road bike, the Canyon Ultimate.

Jumbo Visma's Robert Gesink is possibly Zwift's biggest professional user at the moment. While he doesn't quite take the prize for maximum mileage, he's recently put in a huge block of training, clocking up 2,678km in the last 30 days alone.

In total, he's ridden 10,644km, which pales in significance to a rider's total annual outdoor mileage, but, nonetheless, he's still pedalled a quarter of the way around the world, without actually going anywhere, while simultaneously earning himself 785 slices of pizza.

That said, with a view like that from his home in Andorra, can you blame him?

He threw down the gauntlet with a huge 250km ride on his Tacx Magnum treadmill trainer, which has since been bested by Astana's Laurens De Vreese, who posted a mammoth 370km. However, that seemingly put the Kazakh off, as he's only ridden once on Zwift since.

With his first win since June 2019, NTT Pro Cycling's Edvald Boasson Hagen can hold his arms aloft once again as he takes the cherry for the most kilometres ridden on Zwift, and he does so by a country mile. Logging 19,353km, the 32-year old has climbed over 200,000 metres during 24 hours of ride time – the majority of which was clocked during the winter of 2018-19, and included some mammoth efforts, including a 212km ride as part of a 780km week in the run-up to Christmas.

The Norwegian sprinter has a big buffer to play with, but he's not going to risk losing this one. Since half the peloton has turned to Zwift to keep their training on track, Level-44 Boasson Hagen has upped his 'pain-cave' game, dedicating a room in his home to his new Tacx Magnum turbo trainer-cum-treadmill for the NTT group rides.

Making the most of the situation ✌️ #stayhomestaysafe #stayhomesavelives #quarantineandchill Chris Froome

As part of his ongoing recovery, which Chris Froome himself states is "pretty much complete," the Briton has an underground pain cave to rival the best. His Wahoo Kickr turbo trainer and Kickr Climb are set up with his road bike right next to the same set-up for his time trial bike. Both of these are in a room that has a gaggle of Grand Tour-winning Pinarello road bikes, race-winners' jerseys and a full gym set-up.

He's putting it to good use, though. Despite only joining Zwift recently, he's logged an incredible 815km in the past week alone.

Basically my office during this period, never thought I'd be 'working from home' in an office space so many hours a day 😅🤔. Aftermath of @haute_route @gozwift racing 🤣🎊, finally getting into the indoor training thing now after almost 3 weeks of lock down, quite impressive how technology like @tacxperience can make it so enjoyable. - - - - #covid19 #cycling #whereiride #gozwift #tacx #bikeonscott #noshortcuts #indoor #workout Jack Haig

Mitchelton Scott's Jack Haig has taken our preferred approach to Zwift. An entire room dedicated to a turbo trainer might be pro, but there's something about a laptop balanced on an ironing board that adds a bit of magic to an indoor training session.

In fact, with the ironing board and the use of the Honeywell fan, we questioned whether Haig had taken tips from our guide to the cheapest Zwift setup. His response: "I hate ironing and this seems like a much better use for it."

When Mathew Hayman won Paris-Roubaix in 2016, he did so just six weeks and one day after crashing at that year's Omloop Het Nieuwsblad, a crash in which he broke the radius in his right arm. During the build-up, Hayman rode in excess of 1,000km on Zwift, recreating the efforts he expected to endure during the upcoming Monument.

He's no longer racing as a pro, but his tally of over 8,600km would have dropped him into third place on our leaderboard.

Read our recent extract about him from Procycling magazine: Shakedown on the Pavé

Here we go, 1000km Zwift ride coming up. Target: - 1000km - 33 hours - 8000m climbing (I'm up at altitude 2000m above sea level so makes it even a bit more challenging). Plus I don't have a fan since none are available for purchase with the lock-down in Andorra 🤣 (so I'll probably go through all the towels in our house atleast 10 times). . . Starting tonight at 00:00 am Will live stream as much as possible. Also raising some funds - I would like it to go to the South African federation in developing cycling. So any support will be hugely appreciated. Will post a small update video on my YouTube Channel before the start to give more details. . . #1000kmchallenge #Zwifterlife #Zwift #cyclinglife #cycling #mobelsports #burgosbh #bhbikes Willie Smit

When Robert Gesink rode 250km and Laurens De Vreese rode 370km, most cyclists looked on in horror. But Willie Smit raised an eyebrow, followed shortly by a wry smile. At the time of writing, the 27-year-old is coming to the end of a 33-hour, 1,000km ride, which will raise money for the South African federation in developing cycling.

His Zwift total is currently a little over 3,500km but it's rising by the minute.

Expect Geraint Thomas' tally to rise considerably this week. The Welshman is riding three 12-hour shifts on Zwift to replicate the 12-hour working days the NHS staff call normal in the UK. The NHS staff, and healthcare staff worldwide, are pivotal in the fight against COVID-19, and Thomas' efforts this week will help to raise vital funds.