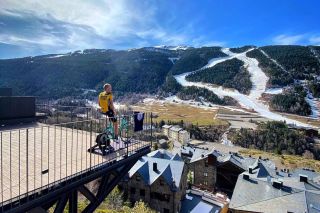 With riders around Europe on lockdown due to the Covid-19 coronavirus outbreak, most of them ­– if not all – have been logging big miles on their turbo trainers.

Jumbo-Visma's Robert Gesink has been among them, taking to Zwift and the platform's fictional Watopia course to get in a 250km ride on his Tacx Magnum treadmill trainer on Sunday.

The Dutchman did a seven-hour indoor session, coming just a few days after his outdoor trainer session with a view at his home in Andorra.

Gesink still has some way to go to match Astana rider Laurens De Vreese, though.

On Friday, the Belgian put in the longest turbo trainer session we've seen yet, logging a giant 370km ride on a virtual version of the Yorkshire Worlds finishing circuit. The 31-year-old spent over 11 hours on the trainer, in a ride titled the '#OliverNaesenChallenge'.

"Show your fighting spirit Against covid-19," De Vreese wrote on Instagram, showing off his ride data and set-up in photos and a video.

There has also been plenty of other online riding, too. At the weekend, RCS Sport and Garmin organised an online ride of the final 57km of Milan-San Remo.

Elsewhere, both the Mitchelton-Scott and Israel Start-Up Nation teams have hosted indoor rides so far, with ISN running a virtual Stay at Home ride on Zwift featuring André Greipel and Alex Dowsett on Friday night.

Mitchelton-Scott, meanwhile, are running a full series of online events, named BikeExchange – Where the World Rides. Simon Yates and Annemiek Van Vleuten are among the riders to have taken part so far.

In honor of @Milano_Sanremo @JasperDeBuyst and i did a 300km ride, connecting some of our biggest cities. Too bad we had a 120km headwind from Mons to Antwerpen. pic.twitter.com/taAMtMr4SGMarch 21, 2020