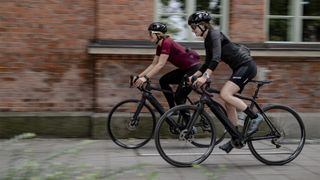 E-bikes are unquestionably going to become even more popular in the post-coronavirus-lockdown cycling world.

Policymakers and urban planners have been speaking of a new era of city mobility – one in which bicycles will become an urban-planning priority. The UK transport secretary has announced ambitious plans to make cycling part of a £2bn 'active travel' campaign, triggering hopes in cycling communities that bicycles will now finally be the norm, rather than the exception, on inner-city streets.

For all cyclists, this is great news. One of the bridging technologies that is convincing more people to use bicycles as both transport and sport is electromechanical innovation. Or, simply, the slick batteries and motors powering electric bikes.

Although purists were initially rankled by the idea of adding battery-powered assistance to the mechanical elegance of bicycles, customer demand has dispelled the myth that e-bikes are a fluke.

Growth conditions for the e-bike market are nearly perfect in this time of global crisis. Government policy has created superior incentives for bicycle ownership, maintenance and use, whilst battery technology is rapidly evolving and diminishing the tyranny of distance and fitness.

But what is the state of e-bike technology in 2020? Should you perhaps be considering an e-bike with less power and better cadence integration?

Batteries and motors are getting lighter – and better

Bicycle engineers all have a common enemy: weight. Lighter bikes often require less effort to pedal, turn or stop, providing more agile riding feedback and boosting rider confidence at all levels of ability. A lighter bike is also easier to live with, should it need to be taken up stairs, onto a train, or put into a car.

The issue with first-generation e-bikes was weight. Adding a battery power source and the accompanying hub motor made e-bikes much heavier than a comparable road bike. With many cyclists obsessing about grams, the motion of riding a bike that more than doubled in weight was always going to be unappealing, even with a battery helping you along.

Engineers have now delivered a second-generation of e-bikes, which are remarkably light compared to their predecessors. Battery chemistry has improved, with gains in energy density. That means you can have a much lighter e-bike without sacrificing too much of its pedal assistance or endurance-enabling range.

Data harvesting has also allowed e-bike product planners and engineers to better understand what customers are actually doing. All that mileage and user data has revealed that many e-bikes could do with less battery capacity – meaning lighter bikes.

We have seen some of the legacy cycling brands now introducing e-bikes with notably smaller batteries. Energy capacity has trended down, from 500Wh to 250Wh. The desire for 500Wh batteries was driven by mountain bikers, who required big batteries to cope with steep climbs. For most road riding and commuting, the terrain profile is slightly more benign, making a 250-to-320Wh battery ideal.

The result has been lighter e-bikes with a stealth aesthetic. Some of the 250Wh models from Bianchi, Colnago, Ribble and Orbea are almost indistinguishable from today's best road bikes.

At 500Wh of battery capacity, most e-bikes were simply overpowered and carrying additional weight to no benefit of their riders. The latest 250Wh batteries deliver stellar range and endurance, and as the bulk of e-bikes in this battery size increase, there should be related benefits of scale, reducing the price.

At both ends of the cycling spectrum, e-bikes were often viewed with scepticism. Inexperienced riders thought of them as nervous-handling, narrow-tyred mopeds, while serious road riders only saw impurity in battery assistance, instead of opportunity.

Many of the legacy cycling-frame brands recognised that ungainly e-bikes could ruin their reputation. The brand value created by decades of beautifully crafted road bike frames could be undone in a moment by bloated e-bikes.

However, dedicated engineers have managed to solve most of the packaging and size issues around hub motors and their associated batteries. The result is modern e-bikes in both the commuter and endurance road-riding segments, which are only distinguishable from their unassisted siblings at very close quarters.

Careful calibration of the hub motor's output tempo, in relation to a rider's power input through the cranks, has made most modern e-bikes a joy to pedal. Gone are the annoyances of delayed power surges when you need help on a sudden incline, or drivetrain drag when you are coasting along.

A decade ago, disc brakes were an oddity for commuters and road riders, as were higher-volume tubeless tyres.

In 2020, however, disc brakes have become standard, adding tremendous safety benefits in wet riding conditions. Most road and commuter bike frames are also rolling larger tyres than before, thanks to tubeless road tyre technology allowing for lower pressures. The progress in tyre technology alone has made for comfier and more confident bikes, as tyres shape better to the terrain they are rolling over, improving both braking and cornering traction.

The weather has always been a convenient excuse to not use your bicycle for a commute – or an excuse not to go on that endurance training ride. Rain might still be a factor, but with power-assistance capable of nullifying even the bitterest headwind, e-bikes are helping more people ride more often, for both work and pleasure, and for that we think electric bikes are a good thing.