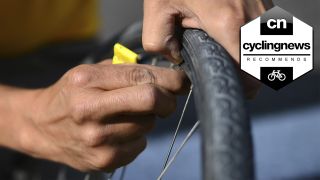 Offices and factories around the world are currently closed due to COVID-19, so you'd be forgiven for thinking that buying the best commuting bike tyres isn't much of a priority. However, with municipalities around the world closing road infrastructure to car traffic in light of the lockdown, there has never been a better time to get around by bike.

A ride around town before heading back to the home office means you'll get some fresh air and exercise every morning and, if you're a key worker, cycling to work means you can give crowded public transport a miss.

Replacing stock-standard rubber with a pair of the best commuting bike tyres is arguably one of the best upgrades you can make to any bike and, dollar-for-dollar, will have the most profound effect on how your bike rides. What you're looking for in a commuting tyre will largely depend on your commute. Are you battling bike lanes lined with broken glass, or headwinds and vast distances?

Read on for a rundown of the tyres the Cyclingnews team mounts on their respective commuter bikes or jump to the bottom to find out key things to consider when shopping for a new pair of shoes for your bike.

The Schwalbe Marathon is arguably the gold standard of commuting tyres. They come in a range of tread patterns, levels of puncture protection and are even available in tubeless-ready options; but the Marathon Plus road tyres with Smart Guard are the best all-rounder tyres for getting you from A to B. Suitable for use on e-bikes, the Marathon Plus aren't going to be the fastest rolling tyres you can buy, but they are Schwalbe's most puncture-resistant tyres, and it takes an impressive effort to cause a flat.

The hallmark feature of the Marathon Plus is the Smart Guard puncture protection belt, which puts 5mm of rubber between the tread and the carcass of the tyre. This means the tyre can pick up a piece of broken glass and the brand's unique blend of 'India Rubber' will prevent this would-be culprit from making its way through to your tube. The tyre also features Schwalbe's anti-aging side wall, which extends the life of the tyre through resistance to developing cracks, it also features grooves to power a Dynamo.

Best for those who commute on their road bike

The sidewalls are made from what Conti calls Duraskin anti-cut fabric, a polyamide mesh bonded to the sidewall that not only staves off damage but also limits how far a cut spreads should one occur, in a similar way to ripstop nylon. All of this, combined with the beefy tread makes for a heavy-duty tyre that doesn't feel like your pedalling while squeezing your brakes.

Best for the multi-terrain commuter

With a rugged casing and well-supported side knobs, the Crossroads Armadillo is the best tyre for commuters whose ride takes them across gravel, dirt and pavement. While the tread blocks do add some rolling resistance, the centre strip is low profile to minimise the drag. As you move towards the edge, the transition blocks gain some height and provide consistent grip as the bike leans over, while the soldier knobs are well supported for cornering traction.

The tyres feature a wire bead and utilise Specialized's Armadillo flat protection, which will stymie broken glass, thorns and cuts through the sidewall. However, as with many of the tyres here they are aren't particularly lightweight but will last seemingly forever.

Long-lasting rubber with a well-reinforced sidewall

Ribmo stands for Ride Bike More, and that's precisely what these tyres will make you want to do. With bead-to-bead puncture protection, the 800D polyamide cord carcass is reinforced by a layer of PT shield fabric, so these tyres are tough, to say the least. The Mile Cruncher compound is one of the harder rubbers used by Panaracer, not only to extend the life of the tyre but also to further discourage sharp objects from embedding themselves and making you late for work.

With all of this, you would be forgiven for thinking the Ribmo tyres would be lumbering and slow; however, they roll along with surprising enthusiasm. Be warned, they are not the easiest tyre to get on your wheels, so make sure you have a good set of tyre levers — and muscular forearms too.

Michelin's lightly treaded ProTek commuting tyres are its highest grip urban tyres, thanks to the rubber compound borrowed from the Pro 4 Grip Service Course high-performance road tyres. This compound excels in the rain, hanging onto wet ground like velcro while still providing for minimal rolling resistance. The tyre is lightly treaded, with ‘progressive grooving on the shoulder’ which Michelin claims helps to displace water, even though bike tyres can’t hydroplane.

To keep your spare tyre kit safely in your saddlebag or backpack, the Protek Urban tyres feature an Aramid breaker to prevent sharps from disturbing your tube. Available in a range of sizes, the Protek tyres are good to go on eBikes and feature a wire bead and reflective sidewall.

Best for those who want a pure slick tyre

While WTB is best known for its off-road and mixed-surface tyres, the Thickslicks are its take on an urban tyre. Based around a burly casing, the tread is thick and free of any grooves or knobs as the name suggests.

WTB makes the ThickSlick in Comp level and Flat Guard casings. The Comp tyre features the brands 60A durometer rubber, a 'durable impervious casing' and a wire bead.  The Flat Guard sees a second layer of rubber throughout the entire casing, as well as an extra layer of rubber beneath the whole width of the tread to provide extra thickness where the tyre is likely to encounter sharp road debris.

While Vittoria's Zaffiro Pro tyres fall more into the road category, they are incredibly hard-wearing, fast rolling, and don't succumb to many punctures; which in our book makes them an ideal candidate for everyday use on your get-around-town bike.

They feature a paired down version of the brand's Graphene 2.0 compound which makes big claims about improvements to durability, cut resistance and grip, and in the real world, seems to deliver on both of these claims to a certain degree. With a folding bead, they shed serious weight over their metal beaded compatriots and feature a full-width nylon casing and a breaker belt under the tread.

Commuting bike tyres will come with either a wire bead or a folding bead; with the difference being that one utilises a steel wire to engage the rim, while the other will use a flexible fibre like kevlar.

Wire bead tyres will be noticeably cheaper than folding bead tyres, and considerably heavier too.

Tyres on commuter bikes fall into two categories, tubed and tubeless. Tubed tyres are your standard clinchers, with a tyre and an inner tube that is inflated with a Presta or a Schrader valve. These are easy to replace but are susceptible to not only punctures from sharp objects poking through the tyre but also pinch flats; where an impact punches the tube against the rim, leaving two small holes which look like a snake bite.

Tubeless tyres have been popular on mountain bikes for quite some time, they are gaining popularity on road bikes and we are beginning to see some trickle into commuter tyres too. Visually, tubeless tires look almost identical to a standard clincher but when used with a tubeless-ready rim, the inner tube is replaced with liquid sealant. If a sharp object manages to puncture the tyre, the hole will be quickly clogged by the sealant — often without the rider ever realising they had a puncture. Tubeless tyres usually roll with less resistance than their tubed stablemates and allow for lower tyre pressures because there is no tube to pinch flat.

While all of this sounds peachy, tubeless tyres aren't perfect and can be challenging to set up. Simply getting a tubeless tyre on the rim can be a herculean effort in itself, and so can getting the tyre to hold air — often requiring an air compressor or flash pump to seat the tyre bead. Furthermore, the sealant has a use-by date and will need to be topped up periodically too.

There is another form of 'tubeless' tyres on the market, which come in the form of airless or solid tyres. While these have vastly improved in recent years, they still ride pretty rough and are downright scary when the pavement is wet. We would suggest you avoid non-pneumatic tyres.

Commuter tires offer varying degrees of puncture protection either by adding a layer of sub-tread, or a breaker belt or puncture-proof belt. This can be something as simple as additional layers of rubber to increase the thickness of the tread. In contrast, others feature specially made fabrics which will sometimes extend over the sidewall to offer further protection.

Unfortunately, puncture protection usually comes at the cost of rolling resistance and adds weight to the tyre. The right level of puncture protection will largely depend on what your commute looks like; if you ride through a veritable minefield of broken glass, the slower-rolling but more robust tyres might be the way to go. On the other hand, if you cover a significant distance on your way to work or school, something faster-rolling is likely to serve you better.

With all of that said, making sure your tyres are pumped up, and checking the tread for wear and embedded sharps every couple of days will limit how often you experience flats.

Tyres can be one of the most intimidating upgrades to make to your bike because of the sheer number of options out there, and the fact that every brand has whizz bang names for every feature, including their tread pattern.

As a rule, if a tyre can’t dig into a surface (like pavement) then the tread on bicycle tyres doesn't add much if any grip. While most bike tyres have some form of tread, when choosing a tyre for a commute, think about the surfaces you will be riding on. If it's paved all the way, a slick or lightly treaded tyre will be your best pick, while if there is some gravel or dirt on your commute a bit of tread might just be the ticket — prioritise shoulder tread as this is what provides grip in the corners.

Most commuters will have tyres between 28mm and 42mm, and when it comes time to replace the tyres on your bike, the width can have a major impact on the way your bike rides. Wider tyres offer increased grip and comfort as they have a larger air volume and lower tyre pressure can be run.

But, don't go out and buy the fattest tyres you can find as they may not fit in your frame, and maybe too broad for your rim to provide sufficient sidewall support. Fenders and brakes can also limit the size you can run.