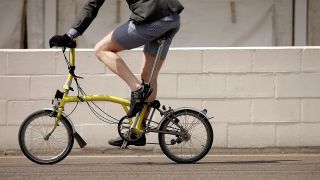 Countries around Europe are looking to cycling to get people moving again as authorities across the continent loosen weeks of restrictions imposed due to the COVID-19 coronavirus pandemic.

Some countries have restricted public-transport use, and measures such as wearing masks are likely to be put in place as lockdowns ease. As a result, there should be a resurgence in cycling, which is already on the rise as people keep their distance from one another while commuting and exercising.

At the weekend, Spain eased what was one of the strictest lockdowns in Europe. In Madrid, residents streamed onto the streets to exercise and celebrate a city-wide holiday.

France, which has also endured a similarly strict lockdown, is preparing to ease lockdown measures on May 11. The government there is planning to encourage cycling to keep citizens safe, and also to keep pollution levels, which have plummeted due to lockdown measures, low.

"We want this period to take a step forward in cycling culture, and the bicycle is a little queen of de-confinement, in a way," said Élisabeth Borne, France's minister for ecological and inclusive transition.

The country is introducing a €20m (£17m) scheme as part of the push. The money will go towards cycle training, temporary parking spaces, and bike repairs of up to €50 at registered bike mechanics.

Parisian authorities are banning cars from the Rue de Rivoli, one of the main streets of the capital, which forms part of the final stage of the Tour de France and which runs alongside the Louvre gallery and the Tuileries Garden.

Elsewhere, Milan and Brussels have worked to create new cycle paths and discourage car use. In Brussels, there will be 40km of new bike paths, while Milan is widening pavements and adding 35km of bike paths.

Germany is getting in on the action, too, with the state of Baden-Wuerttemberg doubling funding for bike and walking paths to €58m (£51m).

"It was very interesting that the Prime Minister was talking about taking the opportunity to push clean, green travel, active travel, cycling infrastructure and getting cars off the road," Jamie Driscoll, Mayor for the North of Tyne region, told The Guardian.

"The real risk is that you end up with a situation where people go back to work in their cars, into city centres that are not designed to take that amount of traffic, that congestion makes it harder for buses to get through and you end up with this vicious cycle.

"We will be coming out of a crisis involving a virus that makes it difficult for people to breathe. The last thing we need is a man-made equivalent."

One side-effect, therefore, of the coronavirus pandemic will be – and has been – increased cycling participation. With the restrictions and safety measures still likely to be in place for some time, the numbers of people getting out on the bike only look set to rise.

When more and more workplaces reopen as the lockdowns eventually fade, cycling will have a fresh appeal as a safer way to get around without running the gauntlet of crowded public transport.

Whether these infrastructure projects and funding increases continue to proliferate in a post-coronavirus world remains to be seen. But with the virus set to stick around for some time before a vaccine can be found, it could only be a positive step if this part of the 'new normal' remains in place.