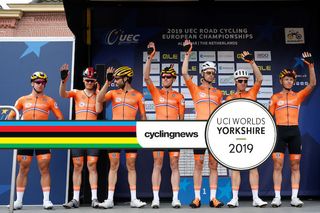 The Dutch men's team is presented to the home crowd ahead of the 2019 Road European Championships in Alkmaar (Image credit: Getty Images)

Ahead of the 2019 UCI World Championships road races this weekend, Cyclingnews is taking a deep dive into the the key teams. Next up: the Dutch men's team.

The Netherlands have had seven elite men’s road race world champions, with four silver medals and six bronze. Their last gold? Joop Zoetemelk, all the way back in 1985. That’s too long for such a major cycling nation.

In Mathieu van der Poel, the Dutch possess the rider most bookmakers currently have as the number-one favourite for the title. It seems absurd that a debutant can command such status, but absurdity is the new normality in the world of 'MVDP'.

The 24-year-old is the cyclo-cross world champion and has won multiple elite titles on the mountain bike, but has dipped his toe into road cycling in the past few years. This year, for the first time, he raced the spring Classics and stunned the world, winning the GP de Denain, Dwars door Vlaanderen, Brabantse Pijl and Amstel Gold, and finishing fourth at the Tour of Flanders. Suddenly, the Dutch coach was persuading him to go to Yorkshire, instead of the mountain bike Worlds, and promising a team devoted to him.

The Dutch also have a hugely useful Plan B in Niki Terpstra – a past winner of Flanders and Paris-Roubaix. While Van der Poel has a devastating sprint finish at the end of a hard race, Terpstra’s greatest exploits have been solo, and he should be expected to attack from range, if only to provide a tactical foil.

With Van der Poel, the Dutch have the rider who is, in the eyes of many, the strongest rider in the field. One of Van der Poel’s key assets is his ability to clear lactic acid and recover from big efforts, thus enabling him to make repeated accelerations. The Harrogate circuit, then, suits him perfectly, with plenty of sharp uphill kicks and technical corners. Speed and momentum will be lost and rebuilt time and time again, preventing anyone from settling into a rhythm.

And then there’s his sprint, seen at its devastating, long-range best at Dwars door Vlaanderen and the Amstel Gold Race. Even if he finds himself in a group with Peter Sagan [Slovakia] or Michael Matthews [Australia], he should have nothing to fear. On that subject of confidence, the spring Classics silenced those doubts about whether he could go the distance in races six times as long as his cyclo-cross outings.

While there can be no concern over Van der Poel’s physical ability, there are legitimate question marks over his leadership abilities. He hasn’t raced with anyone on this team, which is otherwise made up of seasoned WorldTour pros. His results speak for themselves, but it remains to be seen if he has the leadership skills and character to come into that group, command respect, unite them around him, and make his requirements clear.

View from the Netherlands

The expectations in the Netherlands are very high, and most of the fans have Van der Poel down as the number-one favourite. People are very excited about it, as we have a real contender to win. It’s crazy that our last victory was in 1985, but it’s not seen as a big issue – people don’t talk about it as much as they do the 30-year wait for the yellow jersey at the Tour de France, which ended this year [with Mike Teunissen taking the maillot jaune after winning the opening stage].

There’s obviously one main leader in Van der Poel, but then you have Terpstra and Mollema who don’t have to work for Van der Poel and can do their own thing. The rest are domestiques. For Van der Poel, he just has to wait – wait, wait, wait as long as possible, and then just see. The other guys can try something, but if it ends up in a group, only one Dutch guy can win a sprint, and that’s Van der Poel.

When it comes to comparing Terpstra with the other mains favourites, Sagan is faster than him, Julian Alaphilippe [France] is faster, Matteo Trentin [Italy] is faster… The only way Terpstra can win the race is by going early and going solo. Van der Poel is probably able to beat those guys, so he and Terpstra can work well together. If Terpstra goes, it’s good news for Van der Poel – he can wait. They don’t have a conflict of interest.

Mathieu seems incredibly calm and relaxed; I don’t think he’s feeling any pressure. Maybe from his direct environment, but not from the outside. I think he’s ready. It’s going to be hard for him to win, but it won’t be a surprise if he does.