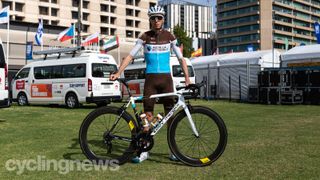 The Tour Down Under marks the first time French climbing specialist Romain Bardet has pinned on a number since last season's Tour de France. He's been in the land of wallabies and wombats since December to acclimatize to the heat and humidity.

In that time, the Frenchman has seen first hand how the ongoing bush fire crisis has affected the country and decided to use his platform to raise money for the relief effort — more on that later.

With Bardet's inherent ability to dance up climbs, we expect to see him test his legs on the infamous Willunga Hill on stage 6. He will have his work cut out though, with George Bennett, Rohan Dennis, Jay McCarthy and the King of Willunga Richie Porte all in the field vying to be first to the top.

Like the rest of his AG2R La Mondiale teammates, Bardet will be riding the Eddy Merckx Stockeu69 Rim in Adelaide, not a surprise given this year's course profile and Bardet's prowess when the road points up.

We caught up with Bardet just before the team headed out for a training ride ahead of the race to take a look at his kit.

Bardet's helmet of choice is the Eoki Legende, a helmet he played a major role in developing. It's one of the brand's better-ventilated lids, and takes inspiration from the first leather helmets seen in the '40s which are known as 'boudins' or 'hairnets.'

Despite the Legende's retro aesthetic, it's a thoroughly modern helmet with big vents, deep internal channels to promote airflow, a wind tunnel optimized shape and a magnetic buckle.

Bollé is back on board providing AG2R with eyewear for 2020, and Bardet has continued with the retro motif reaching for the brand's new Chronoshield to protect his eyes from the sun, wind and winged insects — the flies in Australia can be ruthless, take our word for it.

Based on the design of the vintage Chronoshield, Bardet tells us he likes the big lens because it provides an unobstructed field of view, and the overall aesthetic.

For 2020, AG2R's kit comes from Italian cycling wear brand Rosti. The brand specialises in hand-made small batch custom kit, and prides itself on its use of advanced fabrics. AG2R La Mondiale holds the prime real-estate across the chest as the team's title sponsor, with Rosti and Eddy Merckx also there with smaller logos.

Ahead of his training ride, Bardet was actually wearing two tops, with a lightweight vest on top of his jersey. When we caught up with Bardet a little after 8 AM, the temperature was hovering in the high-teens (Celsius), and many of the riders would head out wearing an extra light layer to be later shed and stuffed into a pocket as the temperature climbed throughout the day.

Underneath, Bardet's jersey was akin to a piece of swiss cheese, with perforations galore to help keep the French climber stay cool and comfortable throughout the day.

The team's brown bib shorts also come from Rosti, with its logo featured along the left leg, and Merckx on the other side. AG2R La Mondiale again has a prominent location down the side of the thigh.

On race days, Bardet's kit choice swaps out from a bib short/jersey combo to a more aerodynamic skinsuit.

Bardet's shoes caught our eye straight away, and we initially thought the French pros custom kicks were one of the many personalised pieces of kit big-name riders often wear — but that is far from the case.

With Bardet being in Australia during the worst of the ongoing bushfire crisis, he saw first hand the extent of the devastation. So, when Mavic approached him with a fundraising effort, Bardet was onboard.

The shoes themselves are the newly announced Comete Ultimate II which see a new fit, updated heel cup construction and refinements to the internal bootie for improved comfort and breathability. Mavic has also tweaked the carbon exoskeleton which now incorporates straps with the brand's Matryx technology, said to use carbon yarns for enhanced stability and less weight.

In collaboration with local custom shoe outfit, Velokicks; Bardet and Mavic are auctioning off his race shoes, with the money to be spread across state organizations working to help those whose lives have been turned upside down by the environmental crises.

If you'd like to donate, the auction is live and will run until January 26.

Placed out in front of Bardet's handlebars is a Wahoo ELEMNT Bolt. The Bolt is a compact cycling computer to begin with, and it's close proximity to the chunky Deda Allanera DCR one-piece bar and stem makes the head unit look even smaller.

The ELEMNT Bolt is connected to a dual-sided Rotor 2inPower power meter to monitor the Frenchman's efforts.