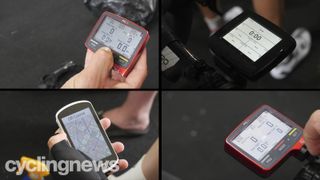 When it comes to racing, the data displayed on a cycling computer can make or break a rider's day. Used correctly, the data can be a valuable asset, but the very data that can help a rider tailor their effort and make informed decisions can just as easily lead to second-guessing or over-exertion.

Power, heart rate, speed and cadence are commonly discussed metrics in all cycling circles, but it's kilojoules that stands out as the all-important number inside the WorldTour peloton. The effort ahead - any effort in fact - will need to be fuelled correctly and measuring energy expenditure is the preferred way to calculate required intake.

The saying 'different strokes for different folks' applies. Some riders like to have the data from their power meters on-screen at all times, whereas others try to avoid it altogether, favouring little more than a map and a timer.

Nathan Haas explained to us that on race day, his threshold isn't considered important as it can lead to over-expectation of ability on a given day. Fluctuations in fatigue and freshness can affect a rider's threshold power, so where a rider might be able to hit the numbers on one day, a seven-hour mountain day is likely to affect it for the next.

For Luke Rowe, a map is all he needs on his Garmin Edge 1030 to perform dutifully, whereas a climber such as George Bennett's home screen displays his power pride of place.

Scroll down to take a look at the data on the cycling computers of George Bennett, Adam Hansen, Luke Rowe and more.

George Bennett admits his GPS computer isn't quite race-ready yet, as we caught him a few days before the start of the Santos Tour Down Under, but he's put a lot of consideration into his screen setup.

With no less than eight screens available to him, Bennett's data is tailored depending on the type of session ahead. The gallery above walks you through some of his different screens, which consist of training, racing, intervals, a lap review, a map, elevation, an overall ride review, and a screen dedicated to pedalling efficiency.

Cofidis' French-speaking Australian is well in tune with the data on his head unit and he has a screen dedicated to each of his bikes. The SRM PC8 doesn't provide maps, but Haas is content with the following numbers, which are displayed on his primary screen:

However, Haas went on to explain he also holds kilojoules in high regard. "It's about building a relationship between KJ expended and how I'm feeling," Haas explained. "If I'm feeling bad, but we've been burning 1000kjs an hour for four hours, I know that everyone else is feeling the same," before adding "cadence is also really important to me, I know there's a certain amount of muscle damage below 70rpm, so I like to keep it high."

Hansen has a reputation for being hands-on with his tech, yet surprisingly, the Australian, who manufactures his own carbon shoes and wears realtime bike-fit technology, leaves things as "pretty standard" when it comes to the numbers. The main screen on Hansen's SRM PC8 provides the following:

On his SRM screens dedicated to averages and maximums, Hansen has fields for normalised power and kilojoules respectively, which are helpful when gauging the day's effort. Normalised power can provide a more accurate representation of the physiological cost of the fluctuating effort common in a road race. It is representative of what a rider would've been able to hold as an average if the effort was steady and constant. Paired with kilojoules, this can help Hansen fuel correctly.

Team Ineos' road-captain, Luke Rowe, needs little more than a map and a weather forecast to do his job effectively. "Maps is the most important thing. It's important for descending, but more for which direction you're going and the wind." Rowe explained.

Prior research of the roadbook will inform him of the terrain ahead, so with the route loaded, his Garmin Edge 1030 will forewarn Rowe of what's around the corner so he can protect his leader.

"Total ascent is also interesting," Rowe added. "You know before the stage, how much climbing the stage contains, so that gives you a pretty good gauge to how much you've got left. You know you've got 1000 and you've done 800 after 20km, you know the rest of the stage is flat."

As a three-time under-23 time trial world champion, it's perhaps unsurprising that Mikkel Bjerg is interested in quantitative data such as power and heart rate. Bjerg's data is unsurprisingly in his native tongue of Danish, but he kindly walked us through the translations, before explaining "I don't use the map because we have the radio, so we always get told what's coming."

On race days, the information Bjerg sees on his Stages Dash screen is:

Stay tuned, part two is on its way.