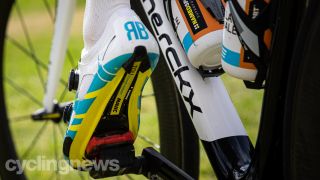 Romain Bardet's shoes for the Tour Down Under (Image credit: Colin Levitch)

The bushfire crisis in Australia has devastated the country and, with the cycling world focusing in on Adelaide this week, riders, brands and even the race are doing what they can to help.

AG2R La Mondiale rider Romain Bardet has been in Australia since late December and, having seen the devastation first hand, has teamed up with Mavic on a special Tour Down Under edition of the Mavic Comete cycling shoes.

Specialized Tour Down Under Collection spotted in the wild

"I’m happy to discover the Santos Tour Down Under which is a popular event that is eagerly awaited here despite the environmental disaster that is affecting Australia today," Bardet said earlier in the week.

"We’ve seen some of the devastation in various places around Adelaide. I hope that the race will be an additional lever in the solidarity movement emerging all around the globe to help the regions stricken by fire."

We caught Bardet in the pits and he told Cyclingnews his shoes are a special Tour Down Under edition, and the kicks will be auctioned to raise money for bushfire relief.

Nick Squillari, the owner of local custom shoe outfit VeloKicks tells us they approached Mavic with the idea of donating shoes to raise money, and the French brand stepped up and donated three one-off, hand-painted pairs from the London Rouleur Classic.

Squillari also tells us when Mavic pitched the idea to Bardet he was immediately keen to help in any way he could and came up with the idea to donate his race shoes.

The Mavic Comete is actually a two-piece shoe with a carbon exoskeleton and features removable inner booties that are tailored for summer or winter riding conditions. It also appears that Bardet's custom kicks are updated version of the Comete, with the top Ergo Dial placed a bit higher on the carbon shell. It also looks like the inner bootie has been updated with a slightly different fabric, and the heel and tongue pulls have been removed. According to the auction page, the internal bootie also features the brands Matryx technology straps, complete with carbon yarn for stability and reduced weight.

The carbon shell on Bardet’s TDU kicks is painted blue and yellow, similar to the Specialized S-Works 7 Down Under shoes that were released earlier this week. Bardet’s name is written on the bottom along with TDU, and the sole is painted in Mavic yellow, with the heel cup featuring the same logo that features on the top tube of his race bike, as featured in our recent Tour Down Under tech gallery.

The auction for the shoes is now live and will run until January 26 with all funds raised being put towards the bush fire relief effort.

For more info or to donate, head over the auction page.