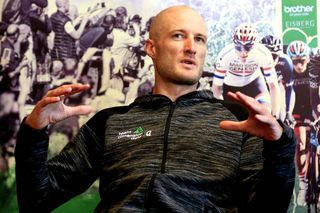 The street name for the finish of stage 4 of the Tour of Britain is rather appropriate: Beast Banks. And, as it suggests, the route over to Kendal from Gateshead has been rather selective. Only the strongest and the more natural climbers have survived, and although Steve Cummings (Dimension Data) is too modest to call himself either of those types of riders, he's part of the final selection.

After what he describes as an average year of form, Cummings seems to be rediscovering the level that has seen him take Grand Tour stage wins and national championships titles. However, professional cycling is a brutal environment and the turnover within teams means that being average isn't always a guarantee of being part of the peloton the following year.

Cummings: Leaving Cavendish out of Tour de France was a big call

I remember the classic line Peugeot directeur sportif Maurice De Muer came out with at the end of one of my first pro races.

We were being subjected to a grilling over the failure of the team to place anyone in the break that decided the race, and as he went through the riders, one of them made the mistake of saying he felt "kind of OK".

Then he looked at the next guy and asked: "What about you?"

It was a lesson in what's expected: honesty in the assessment of your own performance.

That's something Cummings has had to do this season. At the age of 38, he's reaching the final years, and naturally thoughts of what comes next have had to be considered. So is there a plan?

"I haven't spoken to the team yet, and they haven't approached me," he continues. "I'm not worried because I've always done my best, and am just looking forward. I feel like I haven't performed to my maximum for a while, and feel I'm coming back now.

"All the evidence I have in my data – I sound like Dave Brailsford now – says that I'm not too old, so I need to keep trying. I was close to winning at the Arctic Tour of Norway and I'm at the front here. The team has been really supportive, and we've made some changes. I have to remember that I've had my best results in this team. I like what [team manager] Doug [Ryder] has done, as a project, and I'd like to stay here."

The demise of a career is a whole subject in itself because it creeps up on you gradually, and some riders notice and some don't. Cummings' thoughts on the subject are typically succinct.

"Your career is like a climb: eventually you get popped. You're trying to hang on and attack in the final, but you can't," he says.

"Things aren't as easy for me as they were before. I'm a bit of a marked man nowadays, so I have to wait for the right moment and then try, but the level is high and the races are all fast. Like today, there's Team Ineos riding, and then Corendon-Circus took it up, and no one can move."

A fellow rider at Dimension Data, Mark Renshaw, is retiring this season, so has Cummings had any discussions with the Australian on how he reached that decision?

"No, I haven't talked with Mark about retiring," he says. "I think it's a different set of circumstances for them [the Australians], coming so far. I couldn't do that. The guys that do that are special. I can't imagine being away from home for 11 months of the year. They're really tough."

If his final year happens to be this year, then Cummings could always make the change and move into the team car. It's a path that a number of professionals have taken in the past, most recently Matti Breschel at EF Education First. However, that role isn't for everyone, and, while it may seem natural, it also takes a huge amount of readjustment for both the mind and the body.

"I want to do another year, but if it doesn't happen then I'll stay home for a bit with the family," he says.

I'm studying for a degree in Business and Sports Management. I want to get a degree, but it's not about the bit of paper. I want to study, to learn, to keep learning. I think that's important in this sport. Whatever I do, I want to make a difference, be open to change and not just say to people I was a bike rider for 15 years and I know everything. It's quite the opposite of that. I want to keep learning."

Whatever the future brings for Cummings, he seems at ease with the situation. While carrying on is certainly his preferred aim, he knows that one or two extra years in the sport will not define a career that has spanned several decades.

"I'm good here, and if it is my last year, then I'm also happy with that. It could be my last time at this race – it could be for all the next races – but that's OK," he says.

"I know I have a good relationship with Doug, and I'm really grateful for the opportunities that he gave me, but at the end of the day it's a bike team and not a charity. If he thinks I can contribute, then fair enough, but if he doesn't..."